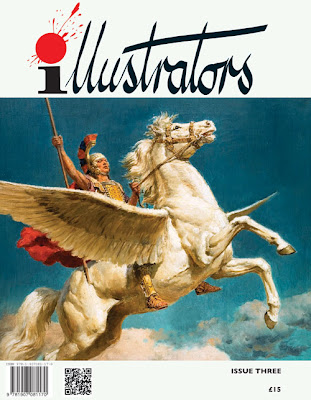 Illustrators journal celebrates the finest magazine, book and comics illustrators published in the UK and Europe featuring fabulous artwork in every issue, much of which is taken from scans of the original art. It gives readers the stories behind the artists with features written by some of the most eminent enthusiasts of this oft neglected art form.

Features inside Illustrators issue 3 include:

Fortunino Matania: Peter Richardson writes about the talented and versatile artist who plunged his audience into the heart of historical events in magazines such as The Sphere and Look and Learn.

Andy Virgil: Bryn Havord writes about one of New York's leading illustrators who Havord commissioned to work for many British women’s magazines.

Peter Maddocks: Bryn Havord covers the life and times of the Fleet Street cartoonist who created Four D Jones for the Daily Express.

Told in Pictures: Former Micron editor Keith Chapman shows that there is much more to the pocket library than meets the eye as he remembers his time working for the publisher of such titles as Combat Picture Library and Edgar Wallace Mystery Magazine.

The Studio: featuring the art of the influential American illustrator Bernie Fuchs.

Illustrators issue 3 is a 96 page, softcover book available directly from Book Palace Books who have an e-preview on their website.

• There are more details and illustrations from Illustrators as well as ordering details on the Book Palace Books website.

• Illustrators editor Peter Richardson was interviewed on downthetubes here.
Posted by Jeremy Briggs at 7:00 am