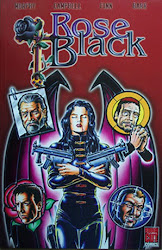 Kudos TV, the company known for hit-series Life on Mars and Spooks, chose the company’s titles to be used in the drama which follows a group of people who uncover the manuscript for a cult graphic novel whose author has signed a deal with the devil.

The producers contacted Rough Cut Comics during the shooting to use their comics and books as backdrop material in the series, and publisher Ed Murphy, who has been running the label for 12 years, says he is overwhelmed by the coverage of his comic-book titles in the drama.

“Our first Rose Black book has been featured prominently in the trailers promoting the show on Channel Four over the last few weeks,” he notes.

“We feature in the opening scene with a character reading our Rose Black title. We’ve got posters in the background of the comic-book shop. I know our other titles feature throughout the series.

“It’s a great acknowledgement of all the hard-work the writers and artists have been putting in over the last few years," he adds. "I think we’ve built up a strong following and it’s great TV producers of this scale are aware of Rough Cut Comics.

“The adverts for the series have been screened in the cinemas and there was the Rose Black front cover six feet high on the screen. I’ve received calls from customers from all over the country congratulating us.

“It looks like ‘product placement’, but we haven’t paid a penny for this. I think the producers were ‘aware’ of us because they phoned us up at the beginning of the year and asked us for specific titles. When I heard it was Kudos, a company whose work I follow avidly, I was very excited to be part of it.”

The Rose Black books, a horror series which has “re-imagined” vampire mythology, are being re-released through Amazon on the back on the Channel Four screenings over the next six weeks.

The company is currently working with artists Dave Golding, Dave Alexander and Dom Regan on a new volume of Freedom Collective strips, which will be unveiled at the first Edinburgh Mart on 20th April.

Rough Cut Comics will also be making an appearance at The Big Glasgow Comic Mart being held in Bacchus, Glassford Street on 3rd February.

• You can find out more about Rough Cut Comics at www.roughcut-comics.com or on their Facebook page