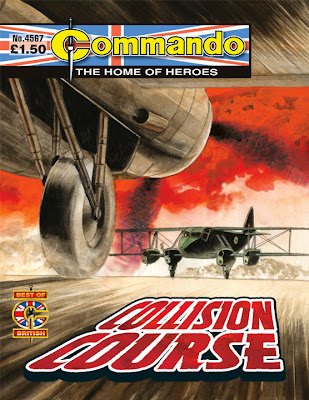 Here's the first batch of DC Thomson's Commando comics for 2013 - and there's a fine selection on offer...

So how did Flight Lieutenant Kerrie Matheson, in his unarmed DH 86 transport, end up hurtling straight towards an enemy Bloch 220 Auvergne aircraft?

Well, it had all started off as a routine secondment from his posting at Coastal Command. He became part of a mission to build a long distance air bridge, ferrying Allied planes from French-held Africa to Egypt.

Then his routine flying duties took a deadly turn - with mystery, espionage and murder setting him on a... Collision Course. 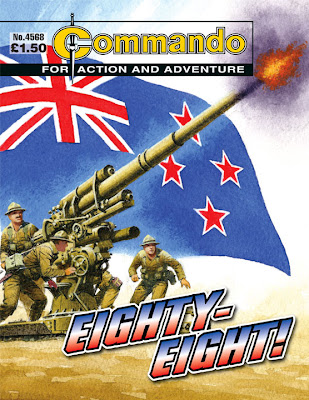 It's not every day you see a German 88mm gun being operated by a group of “Fighting Kiwis” - New Zealanders from a British and Commonwealth Expeditionary Force battling in Greece, determined to hold back the German onslaught.

But this was not an everyday story.

Thanks to a bungling SS officer, the Kiwis were able to help themselves to the enemy artillery's pride and joy. Having been relentlessly pounded by the very same guns, they decided to give the Jerries a taste of their own medicine! 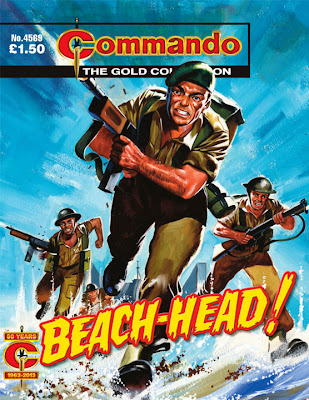 Johnny Malloy was a little guy - five foot zero or thereabouts, but he wore the coveted Commando flash on his shoulders.

He seemed lazy, good-for-nothing, a coward - yet every man in his platoon was ready to die for him when it came to the bit.

Who was he then - this odd little Commando? Just about the most important guy in the British army, that's all!

"All the ingredients for a classic Commando story are here," enthuses Calum Laird, editor. "a dicey but vital mission, a group of soldiers who don't trust a comrade…and Gordon Livingstone's inimitable artwork. I say inimitable with confidence as many have tried and none has succeeded.

"Flipping open the Ken Barr cover in 1963, you'd be met with a script and art which neatly capture all the fine details of service life, thanks to a generation that lived through a world war and National Service. There's a priceless authenticity about this. And you can have it for only £1.50. What a bargain" 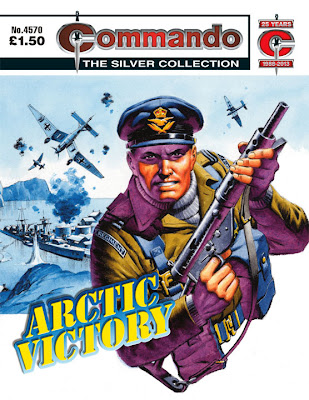 After a few weeks in a certain squadron of the RAF Regiment, Phil Adamson was beginning to wonder if this unit really was just for the defence of airfields. What with unarmed combat instruction, learning about explosives and a mock-raid on a local flying school, it was more like training for a crack Commando squad.

He didn't know how right he was!

"Although it first appeared in the Spring of 1988, it somehow seems fitting to republish author David Heptonstall's icy tale in mid-January," says Deputy Editor Scott Montomery, "when the chill of winter still in the air.

"The story seemingly starts as an air yarn but then changes gear, morphing into a 'men-on-a-mission' adventure with a hint of espionage. It's a little bit different."

*Saving based on discounted Direct Debit price compared with shop price. First quarterly payment discounted by 50% at £12.50 and £25 per quarter thereafter. UK bank accounts only. One year discounted subscription rate of £99.
Posted by John Freeman at 7:00 am