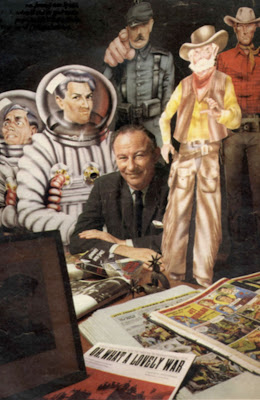 An obituary by Steve Winders

Charles Chilton, who died on January 2nd, was one of British radio’s most innovative and successful contributors. Born in London during the First World War, Charles’ father died in action, without ever meeting his son and his mother died suddenly when he was just six years old. Charles was brought up by his paternal grandmother as a member of a large extended family of eight people sharing just three rooms – one of which was condemned as uninhabitable! On leaving school, he briefly worked as an apprentice, making electric signs, before being taken on by the BBC, where he first worked as a messenger boy and then as an assistant in the Gramophone Library. Later he became a gramophone programme compiler and producer and along with Leslie Perowne, he promoted jazz in Britain through programmes in the late thirties such as ‘Swingtime’ and ‘Kings of Jazz’. Although he began to present programmes himself, he was temporarily stopped because of his London accent!

Called up for military service in the Second World War, Charles trained as a wireless operator and spent much of the war training other wireless operators. In 1945, his previous experience and talents were better utilised when he returned to radio, working for Radio S.E.A.C. (South East Asia Command) in Ceylon. Here he worked alongside David Jacobs, who would later become a member of the cast of his most successful radio programme, Journey into Space. With the end of the War, Charles returned to the BBC and in 1947, married Penny, a secretary at the BBC, whom he had courted since 1940. Their marriage would last 65 years and Penny would make a significant contribution to his successful career, by carrying out research for his programmes. 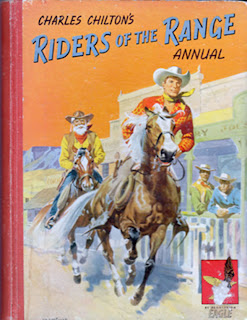 After producing a number of music based programmes, Charles created a new series in 1949 which combined music and drama. This was the acclaimed western serial Riders of the Range, based on actual events in the history of the American west, and which Charles both wrote and produced. It ran to six stories over five years and led to Charles being asked to write a strip version of the programme for the popular boys’ weekly, Eagle. The strip was a great success and outlived the radio version by nine years. Charles set up a long partnership with the artist Frank Humphris and they produced many memorable stories, maintaining the highest standards right to the end.

He also wrote several historical books about the American west. Most notable of these was his 1961 work, The Book of the West. This won him The Western Heritage Award for Juvenile Books, in 1963, after it was published in the United States.

On the radio, Riders of the Range was followed by Journey into Space, a science fiction drama, which proved a massive ratings winner, famously being the last radio programme to beat the television audience. Three serials, broadcast between 1953 and 1956, told the exciting stories of Captain Jet Morgan’s expeditions to the Moon and Mars. Charles adapted the serials into novels and this series too, found its way into a comic strip, in TV Express. He also produced three episodes of the third series of the famous Goon Show in 1952, returning to produce 15 episodes of the eighth series in 1958-59 and eight episodes of the Vintage Goons series, but in his later career he is best remembered for his musical documentaries, in which he explored historical events through the music of the time. Among these are The Blue and the Gray, about the American Civil War, Marching to Glory, about the Salvation Army, How the West was Won and The Long, Long Road, about the First World War. The Long, Long Road was adapted into the stage musical Oh What a Lovely War! in 1963 as a result of Charles’ collaboration with Joan Littlewood’s Theatre Workshop. It was made into a film in 1969 and is regularly revived on the stage.

Charles was awarded the M.B.E. for services to broadcasting in 1976 and retired from the BBC staff the following year, but he continued to work as a writer, with his play The Return from Mars, broadcast on radio in 1981, revisiting Jet Morgan and his Journey into Space crew. In 1984 he wrote a six part radio science fiction serial called Space Force, which had originally been intended to be a new Journey into Space serial, but was changed late in its development to be about a new crew. A second Space Force serial followed in 1985.

After recordings of Journey into Space were found in BBC archives in 1986, the serials were repeated on BBC Radio Two and gained a new audience. They have been regularly repeated since. 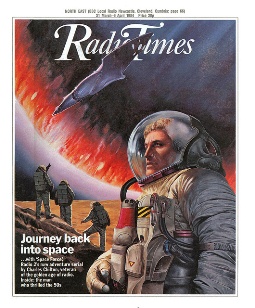 In 2008, at the age of 91, Charles wrote another new Journey into Space play in collaboration with his son David, and he was involved in a further play about Jet Morgan and his team in 2009, although this play was written by Julian Simpson. In a busy retirement, Charles acted as a guide on London Walks for many years.

I first met him in 1980 at a convention in London to celebrate the thirtieth anniversary of Eagle. Here he formed a double act with Frank Humphris and they performed an extract from their Riders of the Range story The Arizona Kid. He was a natural storyteller and communicator. In 2010, he finally produced an autobiography Auntie’s Charlie, published by Fantom Films, an informative, amusing and sometimes poignant account of his life and work.

I wrote to Charles on several occasions over the years and always received friendly and detailed replies. My last communication was just a few months ago, regarding an article I was writing about Paul Carpenter, the actor who played Jeff Arnold in Riders of the Range on the radio. Charles was most helpful and even checked my piece for accuracy when I had completed it.

Charles’ work has entertained and educated millions of readers and listeners over the years. With Penny’s help, he always fully researched his documentary programmes to ensure accuracy and this meticulous desire for truth extended to his fictional work, enhancing both Riders of the Range and Journey into Space. He will be sadly missed.

• More about Auntie's Charlie on the Fantom Films web site, including a preview of Chapter 1

• Roger Howe's interview with Charles Chilton, conducted when he was 92

• Charles Chilton deposited his personal tape archive at the British Library in 2005, where it remains a jewel of the radio collections. Article here on the Sound Recordings blog
Posted by John Freeman at 7:30 pm

Email ThisBlogThis!Share to TwitterShare to FacebookShare to Pinterest
Labels: Charles Chilton, Eagle, Journey Into Space, Obituaries, Riders of the Range