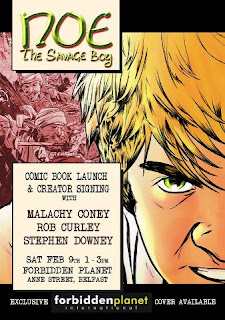 Atomic Diner will be hosting a launch of their new book Noe The Savage Boy #1 in Forbidden Planet Belfast on Saturday February 9th from 1.00 to 3.00pm.

On hand will be the title's creators - Rob Curley (plot) Malachy Coney (script) and Stephen Downey (art) - and copies of the comic on sale will feature a Forbidden Planet Belfast Exclusive Cover.

Noe’s story begins in the village of Baltimore, Cork in 1631 in which the entire community is kidnaped by Barbary pirates and brought to Africa as slaves. Noe’s faith lies in the hands a group of clandestine monks who help train him to become a true warrior and overcome is dark faith.

Noe The Savage Boy is Coney’s first work for Atomic Diner after a career in comics that featured work at Top Cow/Image Comics The Darkness book and titles at Harris Comics and Fantagraphics, among many others.

Atomic Diner was set up in 2004 by Robert Curley, primarily to produce and publish a line of cross genre titles from horror to detective and of course good time super heroes. The company is 100% independent and prides itself on good story telling from Ireland's top creators. Over the past six years they have helped launch the careers of artists such as Stephen Mooney, Declan Shalvey, Will Sliney, Stephen Thompson and Bob Byrne and are proud to continue this tradition by working with people such as Terry Kenny, Maura McHugh, Stephen Daly and Gareth Gowran.

• Malachy Coney's Blog
Posted by John Freeman at 10:00 am