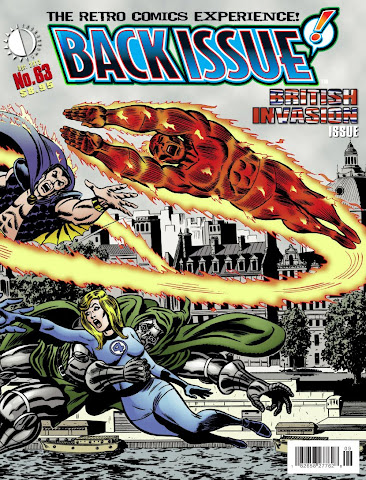 The April 2013 editin of TwoMorrow Publishing's BACK ISSUE (#63) watches the USA’s and UK’s comics worlds cross over in our “British Invasion” issue.

Featuring a history of Marvel UK by Rob Kirby, the Beatles in comics, DC’s British talent pool of the 1980s, V for Vendetta, Excalibur, Marshal Law, Doctor Who and a “Pro2Pro” interview with Peter Milligan and Brendan McCarthy, it showcases the talents of many great talents. These nclude Brian Bolland, Alan Davis, Dave Gibbons, David Lloyd, Alan Moore, Dez Skinn and others.

With loads of art originally produced for the UK market the issue comes with a Mighty Marvel in London cover by Ron Wilson and Dave Hunt, showcasing art from Marvel UK’s rare 1970s “Quadra-Poster” as a deluxe 25-inch long fold-out triptych cover.

Rob Kiby's feature is part of a book about Marvel UK he's been compiling for some two decades now. "I'm thrilled to have been given an opportunity to share a tiny portion of my work with a larger audience for the first time,'" he says. "They've done an outstanding job on the feature, and I'm very much looking forward to seeing all the other British-related goodies they've come up with."