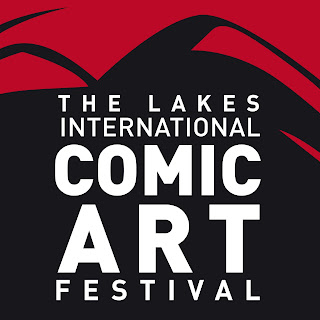 A new festival which aims to match the vibrancy of France's annual Angouleme event was launched last night, to celebrate the very best comic art from across the world, from cartoon strips to superhero comics and manga to non-fiction graphic novels.

The founder patrons of the new festival include Bryan and Mary Talbot who won the biography category in the Costa Book Awards earlier this month. They are joined by another internationally renowned comic artist Sean Phillips.

And, while the Festival organisers are keeping tight-lipped about their guest line-up, at a special event at the Brewery Arts Centre attended by local comic creators, arts organisers, press and councillors, Bryan revealed Guardian cartoonists Steve Bell and Posy Simmonds are signed aboard.

The full guest list will be revealed over the next few months, with top comic archivist and promoter Paul Gravett also on board and lending his support. The organisers, who have been attending numerous comics events around the country over the past few months and are planning the Festival as something long term, have already gained support in kind from designers, PR experts and local business, and had meetings with publishers in an effort to attract their support.

The launch of the new festival comes at a time when there is a growing buzz about comic art. Graphic novels have been taken increasingly seriously over the last 20 years.

Dotter of Her Father’s Eyes, written by Mary Talbot and illustrated by husband Bryan, was the first graphic novel to win the biography category in the Costa Awards. The Chair of the 2013 Man Booker Prize has also encouraged entries by authors of graphic novels.

Bryan Talbot’s work also includes Batman, Judge Dredd, Alice in Sunderland and his Grandville series of detective thrillers. He also wrote and drew A Tale of One Bad Rat, which is partially set in the Lake District, a haunting tale homaging the work of Beatrix Potter.
“The UK is one of the only countries in Europe that doesn't have an international comic festival, celebrating the whole range of this versatile and exciting medium," he says. "This is the golden age of graphic novels, with more, and better, comic art being produced today than ever before.

"The Lakes International Comic Art festival is therefore a concept whose time has come."
Giving a brief overview of British and US comics history, and enthusing about the achievements of European comic festivals such as Angouleme, Bryan clearly has high hopes for this new Festival, supported by his wife.

“The medium of comics, or sequential art, is as valid an art form as any other and is capable of dealing with any subject and any genre in its own unique way, a way that is direct and accessible," he feels. "The best graphic novels are comparable to the best in prose, film or drama.”

The festival will include events where people will be able hear from some of the biggest names in comic art, panel discussions, films, exhibitions and workshops. Authors and artists will also be signing copies of their work and there will be a marketplace to buy comics and comic art.

Sean Phillips, who lives in Cumbria, has also worked as an artist on comics such as Batman and Hellblazer, and more recently on crime genre comics Criminal and Fatale.
“It's great to be involved with any festival that is interested in promoting the vast range of comics out there," he says.

“Comics is a medium, not a genre. It's not just superheroes and the Beano, and this festival is a good chance to see that there are comics for everyone, no matter what their interests are. Comics can be used to tell any type of story in any genre, and that should be celebrated.”
The festival is the brainchild of Julie Tait and her 14-year-old comic fan son Finn, who live in Kendal.

"The Lakes International Comic Art Festival will celebrate this exciting and vibrant art form, which is gaining a growing number of fans of all ages," says Julie. "For me, the fusion of great art and great writing is dynamite. It makes it a very exciting, inspiring and challenging art form to be promoting, celebrating and encouraging."

The event's founders have looked to the comic art festivals held on the continent for inspiration, including Europe’s largest celebration of the art form at Angouleme in France, which takes place later this month.

"In countries like France there's a real appreciation of comics as an art form and our aim is to create something of the atmosphere at comic art festivals like the one in Angouleme," Julie enthuses. "There will be plenty for the real enthusiasts but we also hope it will help to introduce a new audience to comic art."

Julie also runs the team behind the Lakes Alive outdoor arts festival. Speaking about her latest venture she says: "There's a real enthusiasm in the Lake District and across Cumbria for new, contemporary cultural events. We believe this new festival will provide something that is inspiring, exciting and creative for local people to enjoy, as well as bringing in audiences from outside the area."

The new festival will take place at a number of venues across Kendal, including the Brewery Arts Centre, Kendal College and the Town Hall and will be created and presented by Lakes Arts Festivals Ltd, a not-for-profit company.

• More details about the new event will be available at www.comicartfestival.com shortly. It is also possible to keep up to date with plans for the festival by following @comicartfest on Twitter or by liking the Lakes International Comic Art Festival Facebook page.