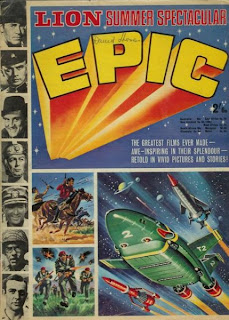 In this case, it's the publication of a strip adapting the war film, Tobruk, in a Lion Summer Spectacular, drawn by Oliver Passingham, whose credits in a long career began with newspaper strips such as Lesley Shane, Rick Martin (working under a pseudonym, John Diamond), Jane Fortune and Sally Marsh during the 1950s.

Reprints of his Lesley Shane newspaper strips, by Amalgamated Press, which appear influenced by the work of Alex Raymond, led to work on Rick Random, School Friend and other Amalgamated titles.

Rubbing shoulders with comic and prose adaptions of films such as Batman, James Bond: You Only Live Twice and Thunderbirds, Passingham's Tobruk went through changes in production, revealed by close examination of the original art boards Matt has access to.

"The original board of the first page of Passingham's Tobruk is comprised of a photostat reproduction of the Tobruk movie poster as a header, a moody night scene depicted in inky washes, and two panels showing frogmen sabotaging a french freighter, depicted with ink line drawings and white paint highlights," he reveals. 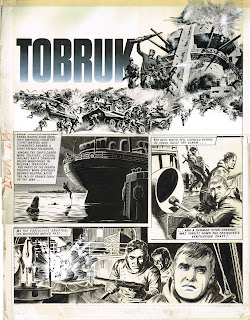 "Upon examining the art-board I found Passingham had originally depicted the entire scene in washes... with the bottom two panels still visible under the pasted on replacement. 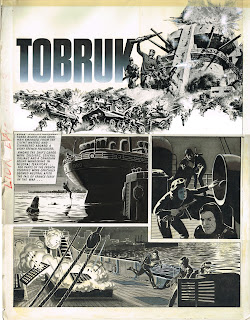 "My presumption for the redrawn panels is that Passingham may have been compelled by editorial to redraw the characters to resemble their movie counterparts," Matt feels. "He certainly nails the likeness of star George Peppard in the bottom panel close up. In those days of no video or internet reference Passingham did a fine job of capturing the scale of the movie and compressing it into the limits of a comic anthology."

You can view more art here on the Pikitia Press blog.

Born in 1925, Oliver Passingham's credits include work with DC Thomson for over 33 years. In the 1970s he began to travel the world, living in the Canaries, on the French Riviera, Monte Carlo and a year in Sydney, Australia during 1980, eventually returning to London in 1990, retiring in 1993. He died in 2003.

His work has been the subject of exhibitions, including one at Arundel in 2009.