In Review: The Ballad of Halo Jones stage play 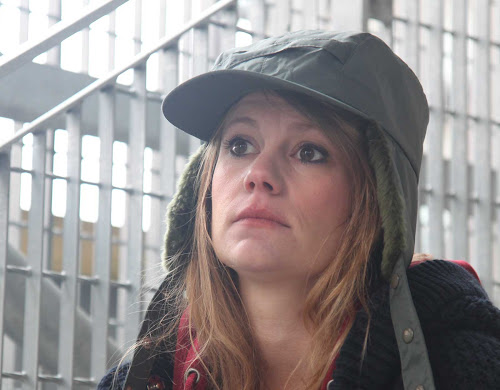 The Story: Halo Jones lives on the Hoop, a futuristic floating slum tethered to a future Manhattan. Citizens of the Hoop live on State Benefit and a diet of soap operas. Halo wants out, and when her best friend is murdered and another joins a youth cult called the Drummers, she might just get that chance…

First created by Alan Moore and drawn by Ian Gibson as a comic strip for 2000AD, their aim was to break out the mold of one-dimensional comic strip characters and create a ordinary heroine – something unlike what was in the comic at that time. The rest, as they say, is history...

The Review: [Not for the first time, as we noted in our first news item on this new adaptation], Alan Moore’s timeless story of the 51st century girl next door made a surprisingly smooth transition to stage back in January. The critical reception made it a logical choice to remount, and where better than the UK’s premier comic convention – Thought Bubble! But as we see, The Ballad of Halo Jones has undergone a few changes since its original staging..

Halo Jones originally first appeared in weekly anthology comic 2000AD in 1984, written by Alan Moore and drawn by Ian Gibson, it turned ‘typical’ 2000AD on its head. Instead of an action hero, it has as its main character an ordinary woman and an unemployed one at that. And where 2000AD was known for its satire, then and now, Halo Jones’ tale of poverty and unemployment resonates. Here people identified with Halo, rather than the authority figures featured elsewhere in the comic.

Not only that, but where 2000AD normally features slang in place of people or more obvious words, Halo Jones takes this to another level with the slang used by the characters, and specifically, the recurring newscaster Swifty Friscoe. Zoe Iqbal reprises her hilarious role as Swifty in this production. Iqbal captures Swifty’s ridiculous nature down to a tee, accentuating every pout and movement with unique style. Cheekily flirting with the audience, she is a vital window into events.

One of Halo Jones’ biggest successes is the world it builds. Carly Tarrett’s Brinna, and Will Hutchby’s Toby meet Halo’s mother as she arrives on the Hoop in a prologue. Adam Beresford, in the first of four demanding, but comic cameos, introduces Halo’s mother to the concept of Increased Leisure Citizens – or the great unemployed. These unfortunates are kept in line and in check on the Hoop through the use of Mam Cards giving credit every thirty days.

Tarrett’s Brinna is a revelation. She effortlessly conveys the timeless wisdom of someone over a century old in a youthful body. Hutchby’s Toby quizzically cocks his head (but thankfully not his leg!) throughout the play. His silky smooth tones are almost perfectly robotic when dispensing Toby’s one-liners.

Less effective is Toby’s appearance, the stocking over his head and jaw mouthpiece not wholly convincing. Always going to be a contentious issue with such highly regarded source material, top marks must go to Hutchby for managing to convey a canine presence through his body language alone. 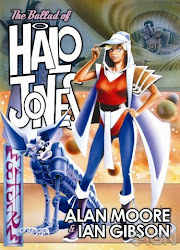 In a sensible creative decision from Director Dan Thackeray, a projector screen at the stage rear takes visual cues from the comic strip, treating the audience to flashes of Ian Gibson’s iconic artwork. Even more successful is the incredible soundscape of Halo. Atmospheric effects take you from the Hoop with its writhing crowds to the snowy wilderness of Charlemagne via the ethereal songs of the Clara Pandy.

Morag Peacock’s Halo makes an understated entrance to the stage, but remains at all times at the heart of the story. Her humanity and radiance shines through as her desperate yearn to escape becomes more and more apparent. Yet, her vulnerability and story really come to the fore when her world falls apart, and her escape becomes a deadly dance of cat and mouse.

In comparison to Halo, Rodice Olsun is! on paper, a much more unsympathetic character. The status quo defines Rodice. Instead of working the system, the system works her, making her afraid of the outside and turning her into everything that Halo isn’t. Yet Sinead Parker’s comedic background pays dividends with a very witty and funny portrayal. With the lion’s share of gags, Parker moulds her into a force to be reckoned with.

Rounding off the ladies of the Hoop is newcomer Ellie Beesley as Ludy, the Ice Ten singer broken by the Hoop. Beesley shows promise at such a young age, no mean feat, especially as the part requires her to sing live to the audience.

Ross Kelly and Ian Winterton’s script manages to turn the soapy, episodic nature of the second book into a much more fulfilling experience. Halo’s death-defying experiences on the Clara Pandy culminate in one particularly effective sequence as she meets the Rat King.

Added into this mix is Halo’s new sidekick, Leni Murphy’s Toy. Murphy, again playing a space siren brings a mixture of steel and care to Toy with some amusing moments as she rebuffs Adam Beresford’s advances and shares some touching scenes with Halo.

Sean Mason brings in a particularly memorable performance as the Gl.. Ge.. er.. who? Joking aside, Mason brings a tangible depth to an unforgettable and mysterious character who is easily one of the more interesting things about the second act. Marvellously obvilious to Halo’s attempts at advances, Marlon Solomon flexes his comedic muscles with some impeccable comic timing as cybernetic obsessed Mix Ninegold.

With a reworked, and slightly less optimistic, ending more in tune with the comics, we are promised that Halo Jones will return, possibly hinting at an adaptation of the third book.

A few technical niggles aside, the presentation of Halo Jones was pretty much as good as it could get on stage. With a larger stage and reimagined visuals and sound, it feels more epic than ever and has clearly grown and organically evolved from its previous incarnation only earlier this year! One thing is for sure; The Ballad of Halo Jones has lost none of its relevance or style and continues to be as rich as when it was first published.

• The Fiction Stroker is actually Matt, a Environmental Consultant from just outside Manchester. By day, he’s recycling various floorcoverings into new exciting products. By night, he's either out at local events, watching some (variable) telly, or reading on his Kindle. He has a lot to talk about. Check out his blog at: http://thefictionstroker.wordpress.com