It's The Dandy Show! Final print issue to be celebrated at London Mart 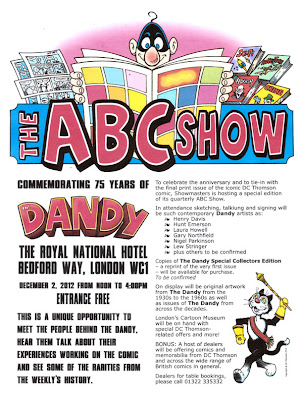 With the final print edition of The Dandy comic imminent - a 100-page special that includes a facsimile of the first issue - the London Comic Mart is marking its transition to a digital format on Sunday 2nd December by hosting a special Dandy-themed day to celebrate 75 years of the much loved comic.

Launched on 4th December 1937, The Dandy hits 75 years at the beginning of December – but, sadly, the anniversary will see an end to the print edition. Hopefully, the move to an entirely digital comic will prove a success – DC Thomson have been working on it for months, so fingers crossed!

To celebrate the anniversary and to tie-in with the final print issue of the iconic DC Thomson comic, Showmasters is hosting a special edition of its ABC Show. Held on 2nd December from noon to 4.00pm at the Royal National Hotel, Bedford Way, London WC1, the festivities are an addition to the regular London Comic Marts held at the same venue.

In attendance will be such contemporary Dandy artists as Henry Davis, Laura Howell, Gary Northfield, Lew Stringer and others.

Organisers say this is a unique opportunity to meet the people behind The Dandy, hear them talk about their experiences working on the comic and see some of the rarities from the weekly’s history.

In addition, Hunt Emerson - also a Dandy contributor - will be at the event, signing copies of his new book, Dante's Inferno; and author David Ashford will be signing copies of his latest book The Art of Denis McLoughlin, published by exhibitor Book Palace, who will also be showing off the first issue of illustrators , the quarterly publication devoted to the finest European illustration.

Dealers at the event will also be offering comics and memorabilia from across the wide range of British comics in general.