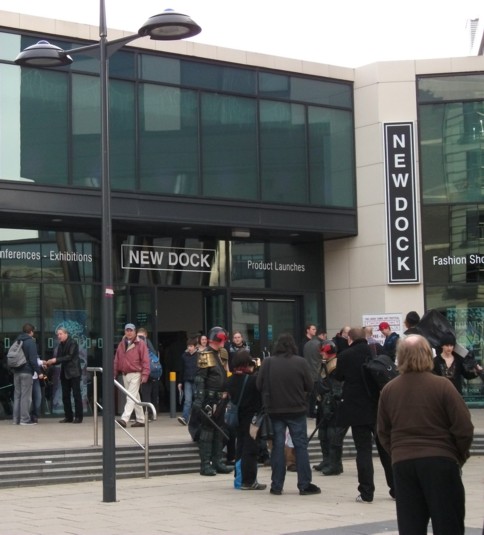 Last weekend the two day Thought Bubble comic convention took place in Leeds as part of the week long film festival. It is a true celebration of the diversity of the modern British comics scene, from veteran professionals, via all the various levels of small press, to the lovingly crafted pieces that would seem as much at home in a craft fair. There was something for everyone, from the hardened con-goer wanting sketches or original art boards from a specific artist to the children who walked around collecting "Phoenix feathers" from the various contributors to that weekly comic to take back to the title's own table.

Thought Bubble 2012 was a great success and a very positive re-enforcement for attendees and creators that despite dwindling sales in the weekly and monthly publishing sector there remains a great passion in Britain for comics in all their various forms.

Rather than review such a large and diverse event instead we present a photo round up (in no particular order) of a selection of the creators that exhibited at Thought Bubble, plus a few others that caught our attention along the way. With the event split over two halls, part one covered (roughly) the Royal Armouries Hall while part two covers the New Dock Hall. 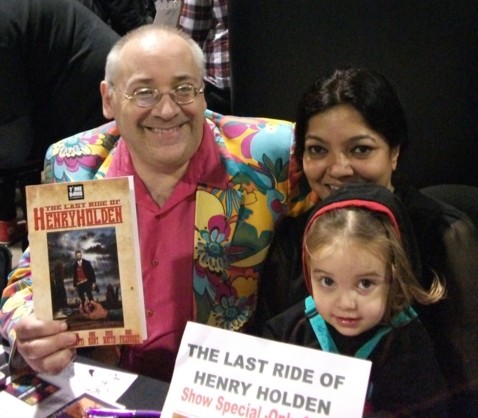 Steve Tanner of Time Bomb Comics was there showing that Thought Bubble is family friendly behind the dealers tables as well as in front as his wife Suzanne and their little bomblette Sasha helped him promote the latest Time Bomb title, the western The Last Ride Of Henry Holden.

There are more details of all Time Bomb's titles on their website. 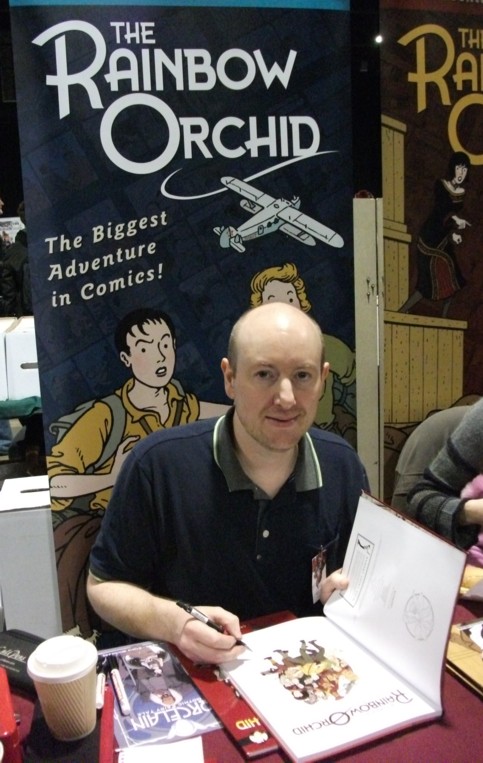 Just across from Time Bomb was Garen Ewing with his Rainbow Orchid stand. As well as handing "Phoenix feathers" out the children, Garen also had copies of all three individual volumes of The Rainbow Orchid, the new Complete Rainbow Orchid omnibus which, if the number of people walking around the hall with copies under their arms was anything to go by sold very well over the weekend, plus for those who thought that they already had all things Orchid, his newly self published Rainbow Orchid Supplement, a "DVD extras" publication of notes on the story, early sketches, adverts and interviews.

There is much more information on The Rainbow Orchid on its website. 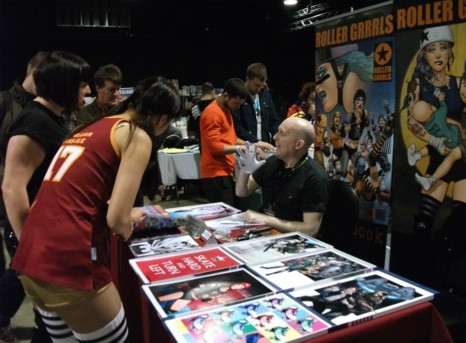 Artist Gary Erskine has many credits to his name over the last twenty years or so but the work that he is currently promoting is the Roller Grrrls concept with sketchbooks and posters currently available and the first issue of the comic due in 2013. Nuclear Miss-ile, Hot Wheel Roller Derby's number 17 (above), was one of the roller girls that was interested in his work.. 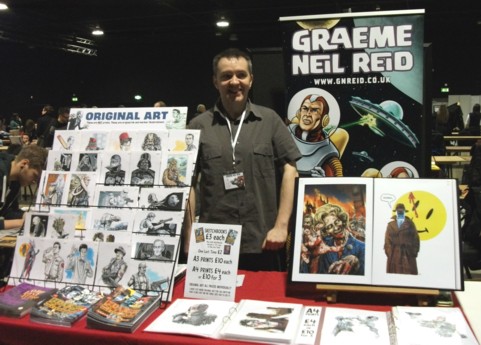 Gary's fellow Scotch Cornerer Graeme Neil Reid was just along the isle with a wide selection of original art as well as prints available on his table. The "Zombie Maggie" illustration that Graeme produced as the cover for Overload issue 1 proved to be a major talking point over the weekend although it was his Star Wars and Doctor Who artwork that sold out first.

There is more information Graeme Neil Reid's work on his website. 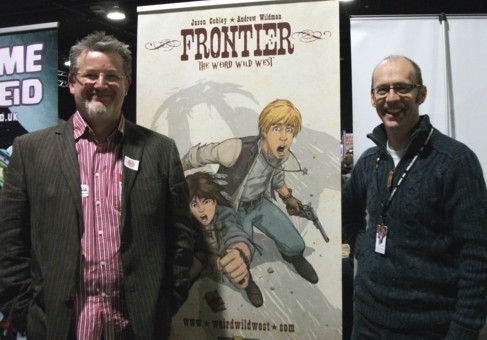 Next to Graeme were writer Jason Cobley (left) and artist Andrew Wildman (right) both of whom were promoting Frontier, their "Weird Wild West" story that was originally published in The DFC weekly comic and then collected by Print Media into a hardback book. As well as copies of Frontier, Jason was also selling the first issue of his new A4 anthology Amnesia Agents while Andrew had copies of his new graphic novel Horizon. 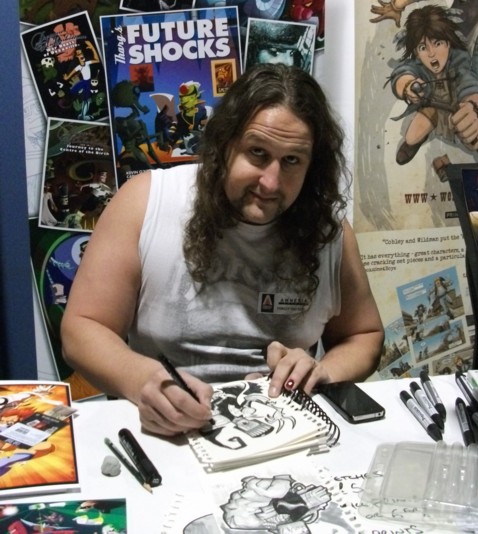 Joining Jason on the Sunday was artist Grant Perkins who, as well as selling prints and postcards of his work, was sketching away for most of the day on a variety of different subjects including this one of a stylised Judge Death.

There is more information about Grant's work at his website. 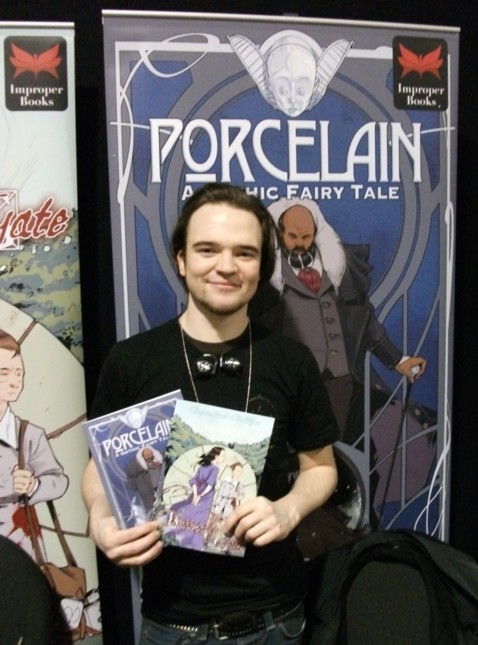 Opposite Graeme, Jason and Andrew was the Improper Books table with two very industrious ladies giving away free preview comics for Improper's upcoming gothic fairy tale Porcelain. Written by Benjamin Read and beautifully illustrated by Chris Wildgoose (above with a copy of Porcelain and Butterfly Close) this graphic novel is due to be published in February 2013 and, based on the preview, should be worth the wait.

There are more details of Porcelain and Butterfly Close on the Improper Books website. 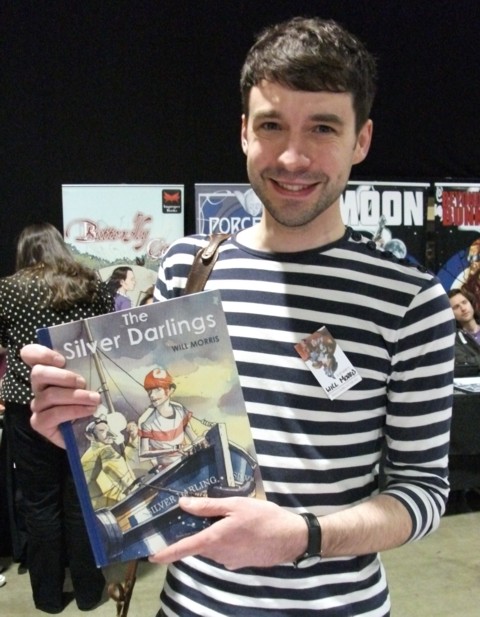 Also showing off a title that is not yet released was artist and writer Will Morris. Will has written and illustrated The Silver Darlings for Blank Slate Books which is due to be released very soon and, from the preview copy, looks lovely.

There are more details about Will's work on his blog and The Silver Darlings on the Blank Slate Books website. 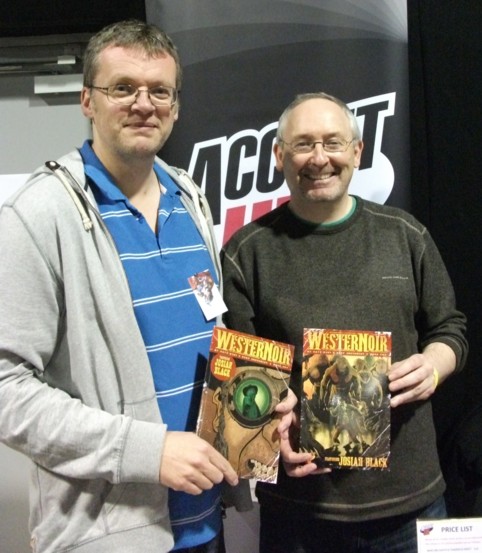 From two books that are not out yet to two that are - the first two books in Accent UK's WesterNoir series. Among the many Accent UK titles on their table, WesterNoir Book 2 was getting its official release at Thought Bubble with writer Dave West (left) and artist Gary Crutchley (right) in attendance. Book 1 was reviewed on downthetubes here and the review of Book 2 will follow soon.

There are more details of WesterNoir on the Accent UK website. 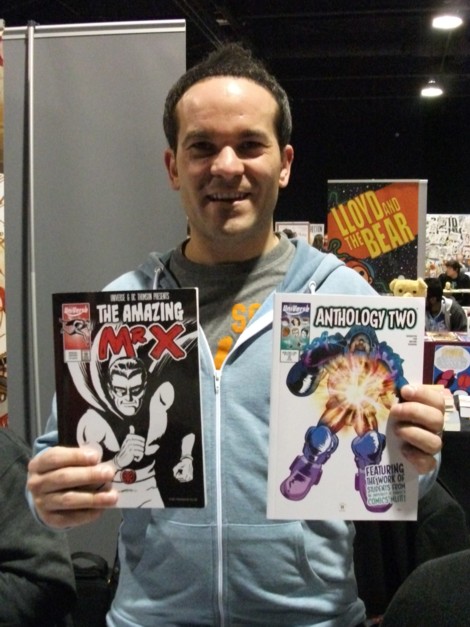 The University of Dundee's comics imprint UniVerse is used to publish anthologies of the work of the students enrolled on the uni's comics courses with Anthology One covering work of the students of the 2011-2012 DJCAD Comics Art and Graphic Novels module and the new Anthology Two, shown above by DJCAD lecturer and Anthology Two cover artist Phillip Vaughan, covering the work of the students in the 2011-2012 MLitt In Comics Studies. UniVerse has also just published The Amazing Mr X in conjunction with DC Thomson which prints the winners and a selection of the other entries in the 2012 Dundee Comics Prize as well as some original 1940s Mr X stories from The Dandy.

Details of ordering Anthology Two and The Amazing Mr X by post are available by e-mailing : universecomic@gmail.com From Dundee to Dublin and Robert Curley of Atomic Diner Comics showing off his latest title, The Crimson Blade. As much as downthetubes focuses on British comics, we are more than happy to extend that to the entire British Isles, and with titles like the supernatural Rosin Duhb, the excellent Jennifer Wilde and the 2011 Irish Comics News Best Irish Comic award winner The League Of Volunteers, Atomic Diner are a publisher to keep an eye on.

There are more details of all Atomic Diner's titles on their website. 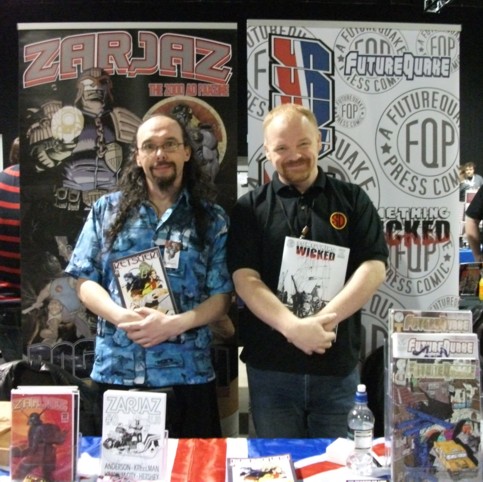 Last but by no means least, two familiar faces to the British comics community, and the 2000AD contingent in particular, Richmond Clements (left) and Dave Evans/BOLT-01 (right) of Futurequake Press. The two 2000AD zines Zarjaz and Dogbreath may be the best known and widely distributed FQP titles but they also produce the SF theme Futurequake which has now reached its 22nd issue and the horror themed Something Wicked which has reached issue 8.
There are more details of all Futurequake Press' titles on their website.

Part One of this photo review of Thought Bubble 2012 is here.
Posted by Jeremy Briggs at 7:00 am