Convict Commandos back in action! 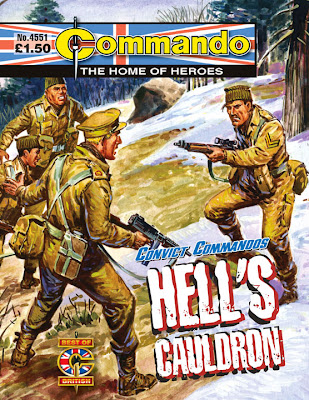 The latest issues of Commando, on sale this week in all good newsagents, include a new Convict Commandos story from Alan Hebden and the tale of a battle-hungry cook!

What more variety do you need? Here's the gen:

Jelly, Titch and Smiler are back in action. Led by their "boss" Guy Tenby, the Convict Commandos are thrown into the middle of an assassination plot in Yugoslavia.

They're used to being kept in the dark by Guy but this time, even he doesn't seem to know what's going on. And that could have fatal consequences for all of them. 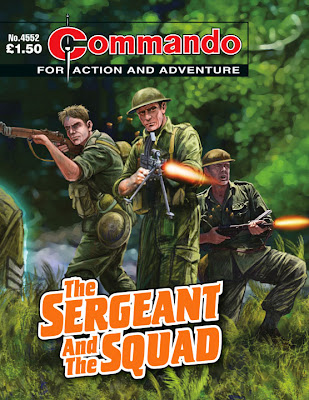 He was a tough loner, a veteran of the war in Far East, a survivor of the terrors of the jungle and a hundred brutal fights against the Japanese. The last thing he wanted was to take a group of raw recruits under his wing.

To them, he was more a like a machine than a man and a killing machine at that – gruff, remorseless and cold. To them, he was the only man who could get them through the war.

But some of those rookies worried that they'd end up just like…The Sergeant! 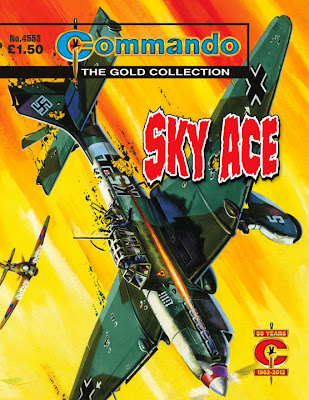 This is the inside story of two ace British fighter pilots, and the strange and deadly rivalry that drove them to outfly, outshoot and outdare each other through every risky second of their dog-fights with the mighty Luftwaffe.

They did things with fighters no aircraft were built to do, writing the story of their feuds with each other in the skies over Southern England in the flaming wreckage of dozens of Nazi planes. They became a legend in their own lifetimes.

Between these covers is their glorious story.

"I have no idea if Mr Maitland, who wrote this story, was ex-RAF, but he certainly gives the dialogue an authentic period feel," notes editor Calum Laird of this re-presented issue. "You feel as though you're part of a wartime squadron, drinking in the atmosphere.

"His efforts are aided and abetted by the efforts of Messrs Ford and Barr - Ford's very fine black and white work and Barr's bright, bold cover match the atmosphere of the story beautifully.

"Oh, and in case you're wondering, it's not just atmospheric, it's a cracking story too." 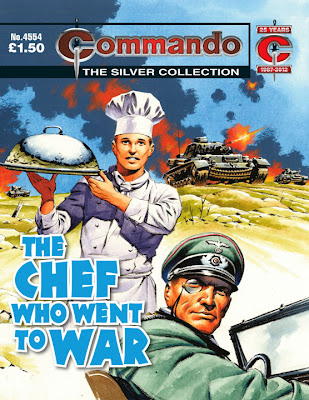 Stanley Simpson couldn't stand life in the Catering Corps. He desperately wanted to be a fighting soldier.

Well, the German Army was heading straight for the kitchen where Stan worked, so his first taste of action was going to come a lot sooner than he reckoned!

"Get ready for a delicious Commando caper," enthuse Deputy Editor Scott Montgomery of this story, "cooked up by a trio of talented Commando legends   our compliments to writer Alan Hebden, inside artist Denis McLoughlin and cover illustrator Ian Kennedy.

"Set against the run-up to Dunkirk, The Chef Who Went To War is classic Commando fare. It features a man who wants to get out of the kitchen and fight, as well as his cowardly mate who it seems, 'Can't cook, won't cook.' And, unfortunately, 'Can't fight, won't fight' either!

"You may want to take your time and savour this mouth-watering story. Or you may wish to bolt it all down quickly in one go. Either way, enjoy."