Last weekend the two day Thought Bubble comic convention took place in Leeds as part of the week long comic art festival. The event has grown in leaps and bounds since its inception in 2007 and this year demand from sellers for its 300 odd tables meant that they sold out months in advance. Indeed the keenness of some attendees was shown on the wet Saturday morning when sellers entering the halls over 1.5 hours before the official doors open time were walking past people already queueing for the 10am start.

Thought Bubble is a true celebration of the diversity of the modern British comics scene, from veteran professionals, via all the various levels of what gets grouped as 'small press', to the lovingly crafted pieces that would seem as much at home in a craft fair. There was something for everyone, from the hardened con-goer wanting sketches or original art boards from a specific artist to the children who walked around collecting "Phoenix feathers" from the various contributors to the weekly Phoenix comic to take back to the title's own table.

Other events seem to get dominated by themes, such as MCM Expo with manga/anime and its cosplayers, or Kapow and the London Super Convention with the US superhero clique, but Thought Bubble, while having manga, anime and superheroes as part of it, gives the impression of a much greater diversity in its make-up. Of course attendees could buy manga books and Marvel and DC superheroes, but they could also buy Victor, Warlord, Blast, Deadline, 2000AD and the Judge Dredd Megazine.

Thanks to Lisa Wood and her organising team, their red shirted volunteers, and the girls (and some boys) of the Roller Derby squads, Thought Bubble 2012 was a great success and a very positive re-enforcement for both attendees and creators that, despite dwindling sales in the weekly and biweekly publishing sector, there remains a great passion in Britain for comics in all their various forms. 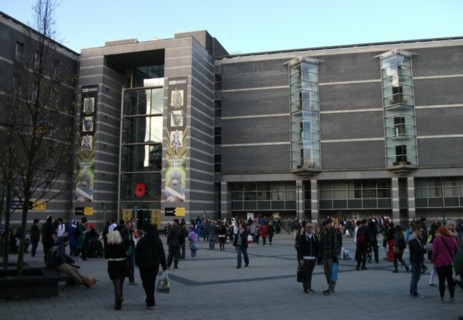 Rather than review such a large and diverse event instead we present a photo round up (in no particular order) of a selection of the creators and sellers that exhibited at Thought Bubble, plus a few others that caught our attention along the way. With the event split over two halls, part one will roughly cover the Royal Armouries Hall (above) while part two tomorrow will cover the larger New Dock Hall. 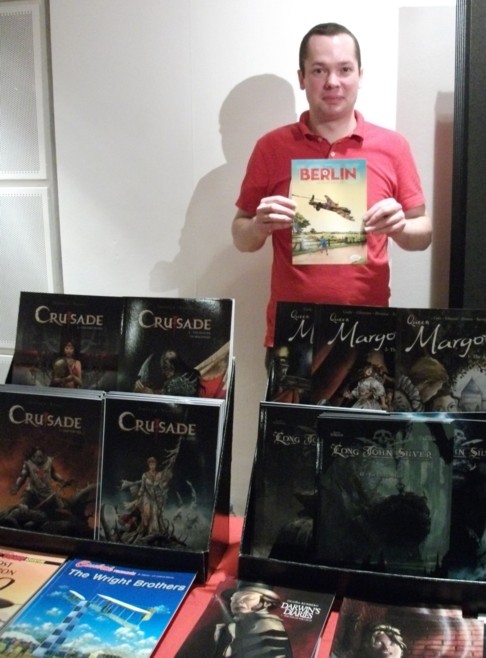 Bandes dessinees publisher Cinebook were the first dealer that many people would have visited as they were just at the door to the Royal Armouries Hall. Here Cinebook's Aldous Russell shows off the excellent and brand new Berlin - The Seven Dwarves which was reviewed on downthetubes the week before Thought Bubble.

There are more details of all Cinebook's titles on their website. 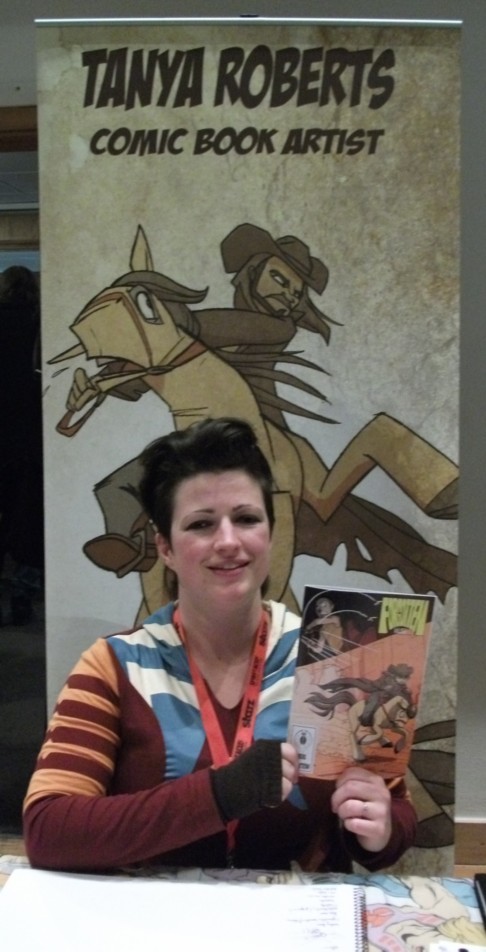 Another Thought Bubble attendee featured on downthetubes in the week before the convention was Star Wars artist Tanya Roberts. Tanya gave us an interview about her work in which she told us about her first self published title Forgotten Muse which she released at Thought Bubble, and which she described on the Saturday night as "selling like hot-cakes".

There are more details of Tanya's work and Forgotten Muse on her website. 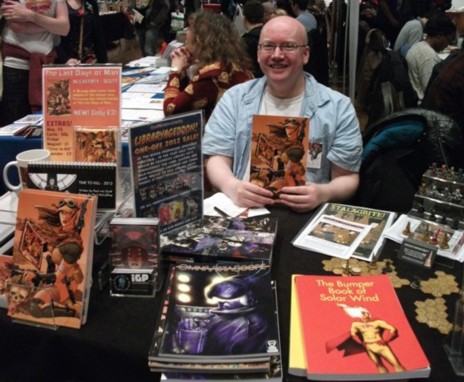 Writer and editor Paul Von Scott is well known in the British comics scene for the titles Solar Wind and OmniVistaScope. His latest title is The Last Days Of Man, a compilation of all the various work that he has done with artist Paul McCaffrey, and which is subtitled A Study Of Human History By Professor Brabblepap. Paul also creates role playing games as well as the range of Midlam Miniatures RPG figures and he had a selection of these for sale as well.

There are more details of Paul's comics, games and miniatures on his OmniVistaScope website 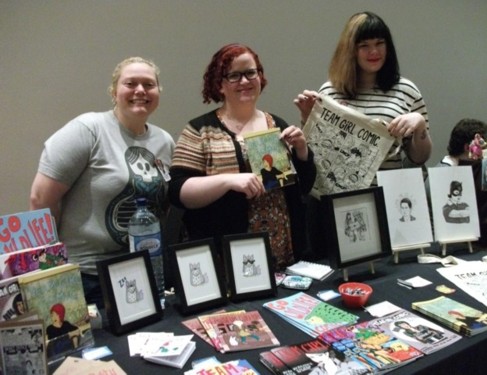 Glasgow collective Team Girl Comic were at Thought Bubble in force with a wide selection of merchandise from all six issues of TGC to branded bags, postcards and badges. Kat Sicard, Claire Yvette and Coleen Campbell (left to right above) were also joined by Iona Mowat, Mhairi Hislop and TGC editor Gillian Hatcher.

There are more details of Team Girl Comic on their website. 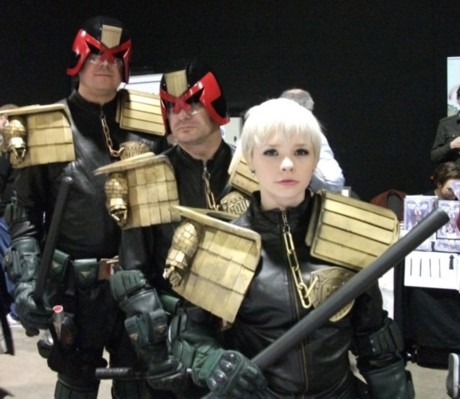 With the Judge Dredd based fan made film Judge Minty being screened several times over the weekend to very positive reviews from those who were lucky enough to see it, it was unsurprising to see the Planet Replicas version of the judge uniform on display around the event with model Lauren Integra as their petite Psi-Judge. 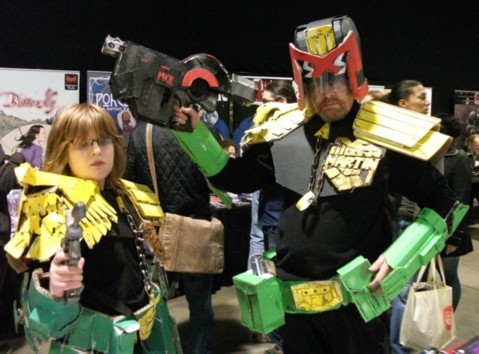 However, as if just to prove that cosplayers do not need a huge budget, Martin and Frankie Currie were also attracting a lot of attention due to their remarkable ingenuity with cardboard and paint. 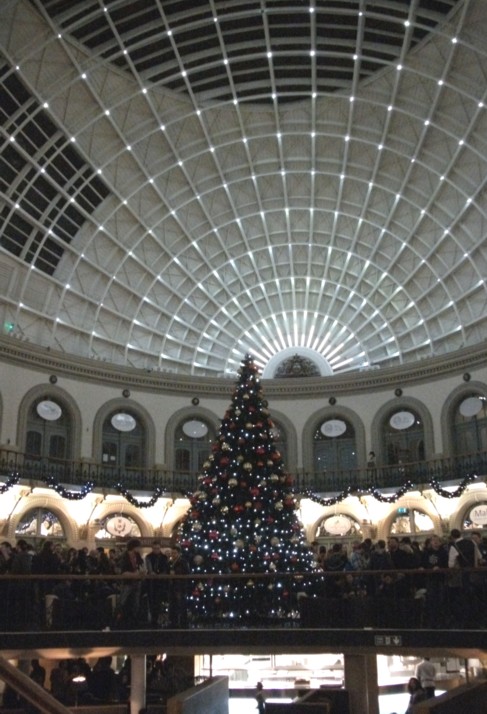 Saturday ended with a evening social event in the beautifully restored Leeds Corn Exchange, complete with enormous Christmas tree, which either went well if you gave in to the call of the dance floor or not so well if you wanted to talk over the increasingly deafening music and see people through the decreasing light levels. The walk back to the Royal Armouries area afterwards showed that the New Dock itself is perhaps even more striking at night than it is in the daylight. 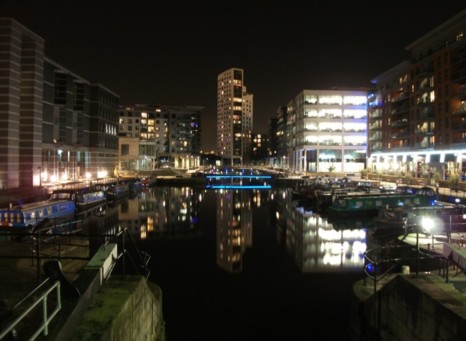 There will be more Thought Bubble photos in Part 2 tomorrow.
Posted by Jeremy Briggs at 10:10 am