Rick Fury - Rapper on the rampage! 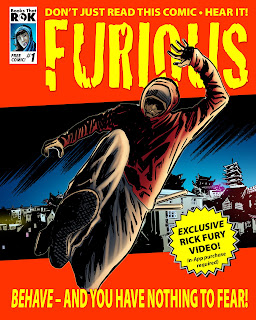 Featuring a full soundtrack that brings the story added life and excitement, FURIOUS is set in an alternate, dangerous Britain where Northern England has been leased to China to pay Britain's enormous debts and Scotland is an independent nation. On the streets of South Shields - now Shanghai North - the rebellious population are subject to absolute rule, where many forms of entertainment are banned and street gangs enforce the law of the occupying nation.

The ongoing FURIOUS audio comic is just one more step in artist/rapper Rick Fury's path to global domination! Rick's exceptional talent puts him at the forefront of his profession, bringing a fresh look to Hip Hop, rapping about everyday situations and life in general.

Rick Fury is undoubtedly one of the North East's finest and most hard working emcees. His remarkable story-telling ability, sincerity, humour and masterful wordplay have gained him wide recognition as one of the best. Constantly writing, performing and making music,both as a solo artist and in collaborations... Rick truly does live and breathe his art.

This free comic includes the option to buy Rick's latest single "Rage", which will unlock an exclusive Rick Fury video within the app!

• Furious Episode 1 audio comic is available to download from iTunes now for iPad, iPhone and iTouch