There will be plenty to look out for and buy at this weekend's Comic Expo in Bristol this weekend (if you're one of the lucky ones who have a ticket for this now sold out event) - but one title you definitely need to track down is Jason Wilson's Day of the Deal.

This is a great, if sobering, sequel to the controversy-stirring but brilliant Smuggling Vacation (quite apart from media and MP furore at the storyline, at one point creator Jason Wilson considered himself banned from appearing at certain comic events to sell the self-published work).

Set several months after their first adventure, the new story catches up with the lives of now failed amateur smugglers Stan, Kaye and Mikey in their home town of Alleyton over the course of what’s meant to be typical lazy weekend.

The story contrasts sharply with the its high energy, fast paced drug smuggling predecessor, as Day of the Deal is set over 24 hours; set in one small town; and tells a more intimate and stinging tale, as Stan, Kaye and Mikey become involved in their most dangerous and humorous escapade yet.

It's a great story and it's to Jason's credit that he's again taken the initiative and published it himself once more, a testament to the sheer determination downthetubes admires about many a British comic creator.

Although lacking some of the Ealing comedy-style madcap nature of the first book, its focus on such a short time span as a drugs delivery unfolds provides plenty of wicked yet enjoyable character observation.

The finale, as drug masters, police and hapless wannabes all rush headlong to a grim conclusion for at least one of the main characters, is packed with some fine pathos and beautifully realized art. (Without giving too much away, the look on the faces of at least two characters as events reach a conclusion, for example is just brilliant). 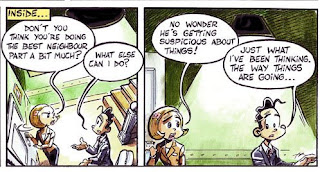 The release of the book has been much delayed after Wilson and his first book became embroiled by association in a high profile Midland’s drugs investigation.

Copies of Smuggling Vacation were found at many raided addresses throughout England and the Netherlands as part of Operation Downpour – an investigation into an international drugs ring, which was successfully concluded last month with the conviction of eight men at Birmingham Crown Court.

Jason's first book was to feature in the trial as both exhibit for the Crown and Defence, as the Crown alleged some of the defendants had used the book’s distribution to mask their activities, whilst two defendants claimed they were honestly and legally distributing the book to British prisons as well as coffee shops in Amsterdam.

The head of the gang, Anthony Spencer, asserted many of his activities related to research for the forthcoming book Day of the Deal for which, as with Smuggling Vacation, he acted in the credited role as ‘Crime Consultant’ for the book’s author. (Spencer is also Jason Wilson's father).

The Crown asserted Smuggling Vacation had been used as a cover for their illegal activities and that the book illustrated some of the gang’s working methods, in particular in relation to mobile phones and covert codes employed by the gang.

However, the prospect of Smuggling Vacation being used as a prosecution exhibit and its creator appearing as a Defence Witness being used in the drugs trial were averted when all defendants in unison pleaded guilty before trial to avoid the anticipated heavy sentences that a long trial would bring.

Last month, as the gang was sentenced to a combined total of 40 years the Queen’s Council stressed that they accepted the book was not part of any illegal activity and that there enquiries had shown it to be a both substantial and legal enterprise by its author.

Even so, the following media coverage saw Smuggling Vacation featuring on BBC Television and Sky Television, on Serious Organised Crime Agency’s own website and several regional papers as ‘the cement mixer gang’ made the news that day.


Reporting on the trial, WebNewswire notes that Spencer and his criminal associates were under surveillance for months. Officers watched meetings at locations in Coventry, Sheffield, Kent and Amsterdam and saw the gang burying purpose-built safes which could store up to 140 kilos of drugs, filmed a cash handover, and watched as drugs changed hands.

Intelligence sharing with the Dutch Police led to the discovery of a farm in Zwanenburg, Amsterdam, which was being used as a drugs warehouse, and a flat in Ijplein, Amsterdam, that officers described as an Aladdins cave of drugs paraphernalia, including a pill making machine. Class A and class B drugs were also recovered.The investigation and anticipated trial had understandably delayed the release of the new book as any form of promotion would have been very inhibited and legally problematic, largely because of the drug dealing themes in the new book and its uncomfortable parallels with the recent trial.


Comics and books about drugs have often been the target of police and Customs action down the years. UK publishers Knockabout, who distribute titles such as the Furry Freak Brothers here, have been frequent targets for court action in the past.

• Day of the Deal is unveiled at the Bristol Comic Expo (May 23rd,24th). Prior to the launch at it is available at www.smugglingvacation.co.uk.

• Read our review of Smuggling Vacation

• Smuggling Vacation is available from Smallzone and www.smugglingvacation.co.uk or order it through any bookshop (ISBN:9780955917004) priced £6.99.

• Serious Organised Crime Agency: 44 years for Career Criminals who planned to flood the UK with drugs

• Grantham Journal: Grantham man jailed for his part in a plot to flood the UK with drugs