In Review: Thorgal - The Master Of The Mountains 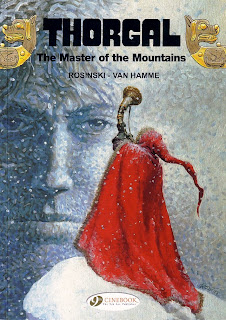 Writer Jean Van Hamme may be more familiar to us for his contemporary thrillers such as Lady S, Largo Winch and XIII with Largo Winch having been turned into a movie and XIII into a mini series, but he has also written the Viking sword and sorcery adventures of Thorgal.

Thorgal first appeared in Tintin magazine in 1977 with the first compilation album being published in 1980 and to date there have been 32 Thorgal albums. Van Hamme wrote the first 29 before handing over the reigns to Yves Sente while the artist for all the books has been Grzegorz Rosinski. Cinebook has now translated 13 of the French language albums into English with the latest being The Master Of The Mountains which isn't so much sword and sorcery as crossbows and time travel.

Thorgal has been trekking alone through the snowy mountains and takes refuge in an abandoned cottage for the night. There he discovers a young slave called Torric who has escaped from Saxegaard, a local tyrant who styles himself Master Of The Mountains. The next morning they discover that the snow has gone, and the cottage is lived in by a young woman called Vlana. Having spoken to Vlana at length, Thorgal wakes up again to discover the snow is back, the cottage is abandoned and Torric is gone. As he leaves the cottage thinking it was all a dream, Saxegaard himself arrives and while Thorgal has never met him before, Saxegaard seems to know rather too much about him and about his dream. As realisation dawns on Thorgal that he has been time travelling between two related time periods, Saxegaard forces him to return to the past once again.

A time travel story was not what I was expecting from a Thorgal book and Van Hamme weaves an intriguingly complicated tale as Thorgal and Torric move backwards and forwards in time discovering the differences that their actions have caused after each time jump. Grzegorz Rosinski's art takes in everything from the sweeping landscapes of the mountains to the viciousness of the hand to hand combat in a style that is reminiscent of John Ridgway's colour work, as well as providing an oil painting for the cover.

Since this is a fantasy tale the method of time travel is largely irrelevant and it is the consequences of the characters actions in each time period that drive the story on as the plot becomes more complex, twisting back and forth from the past to the present through the numerous time jumps. In a way it is reminiscent of the Doctor Who story Blink in which the Weeping Angels take their victims back in time and effectively force them to take the 'long' route to the present by living through each day. In this book it means that the reader soon realises that the Master of the Mountains and the slave boy who is running away from him could actually be one and the same person while being left wondering just where Vlana fits in.

Master Of the Mountains is an unusual story for Thorgal but it is an intriguing and satisfying one that can readily be read as a stand alone book without the need for knowing the often complex back-story of the main character.

There are more details of the English language Thorgal books at the Cinebook website.

There are more details of the French language Thorgal albums at the Thorgal website (in French).
Posted by Jeremy Briggs at 7:00 am