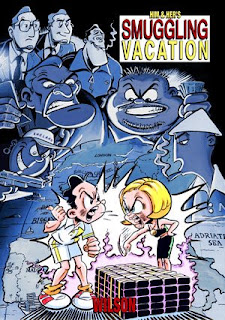 Updated 4/9/08): Jason Wilson's recently-released graphic novel Smuggling Vacation, a comedy tale of two hopeless accidental drug smugglers and the gang of criminals hot on their tails, has been greeted with calls for it to be banned in prisons from an MP.

Now Jason says a comic events organiser has also threatened to ban the creator from future events, for fear of adverse publicity, surrounding the book. The organiser has denied the claim.

It was a feature in Midlands newspaper The Sunday Mercury that first seems to have kick started controversy of over Him & Hers Smuggling Vacation, a collaboration between convicted drugs smuggler Anthony Cyril Spencer and his son, Jason.

The paper claimed the book, based on the story of a married Coventry couple who tried to smuggle a large cannabis stash from Spain into the UK, offers with top tips on drug smuggling and is being circulated at HMP Birmingham and "describes in detail how police undertake surveillance operations".

Jason, who previously worked as an animator at Birmingham’s Custard Factory, acknowledged the book has been a big hit at Winson Green prison, which has appalled Birmingham Perry Barr Labour MP, Khalid Mahmood who said he was shocked that prisoners have been allowed to read the book.

“I’m absolutely appalled. I don’t want to stop former criminals writing about their experiences, but to actually put information into a book like this which will only increase the criminal knowledge of inmates is highly dangerous.

“Prison authorities should have stopped this from getting into the wrong hands. We don’t want our prisons turning into universities of crime.”

"I was pretty stunned when I first picked up the paper," Jason told downthetubes of the initial report and the MP's reaction. "I was expecting just a small mention so I was lost for words initially."

Although his father praises the accuracy of the book, Jason, who says being raised by one of the Midland’s most notorious criminals was a traumatic experience, told the Sunday Mercury he doesn’t want his book to make the criminals look like heroes.“I don’t want to glamourise them, like one of these Guy Richie movies," he told the paper. "Criminals are very hard people to envy. They have all been to prison... They are all dysfunctional. But they certainly aren’t ignorant or dumb.

“The ones I’ve met through my father are all passionate about crime, and are more intelligent than they are given credit for. That’s what can make them terrifying.”

Indeed, Jason hopes that if the book is a success it will help his father keep away from crime in future. “Parents are always meant to worry about their kids,” he told the Mercury. “Instead it’s always been me worrying about dad. I’d much rather that he was helping me write comic books all the time."

At first working on the principle that all publicity is good publicity, Jason remained calm in the face of growing controversy, even when The Sun picked up the story, along with other local even overseas newspapers. But now, a report in the Sheffield Star about the book may have caused Jason to be banned from events organised by company Golden Oribit, because the organiser fears controversy over the book may cause adverse publicity.

Although it's still hoped some accommodation can be reached between Jason and Golden Orbit's Gez Kelly, Jason told downthetubes he fears the worst.

"For someone in the comic industry to be so sensitive and to subscribe to a ban I find stunning," Jason commented on his blog.

"The issue is that the coverage and reaction to [the report] was discouraging attendance to the event itself," Mr Kelly told Jason in correspondence. He is now seeking reassurances and restrictions that Jason's attendance at his events be kept quiet and should not result in any media attention.

"The condition he's pushing forward is I agree not to publicise, co-operate with or encourage anything that might create any media attention where I am attending a Golden Orbit event," says Jason. "If I agree he'll allow me to go Liverpool at the end of the month, if not I cannot attend - but [he says] it's not a ban?!

"I'm still mulling it over, I'm sure there's some who'll agree he has the right, but it feels very wrong to me."

"Jason Wilson has not been banned from attending the marts," Mr Kelly told downthetubes, "however perhaps he does seem keen to embellish some concerns I had after attending an event with us last Saturday.

"There was a fair bit of negative reaction following a local papers' report (Sheffield Star, Friday, 29/08) over the weekend and early into this week which I felt was important to deal with.

"I have asked Jason to just be a little bit more straight forward with us in future.

"As a policy, Golden Orbit would not seek to ban any publication without very good reason (and in all truth it would probably be difficult to ever do so completely)."

Readers of Smuggling Vacation have sprung to the defence of the book -- and poured scorn on MP Khalid Mahmood's calls for it to be banned, saying it can't be blamed for helping criminals.

"I reviewed it a while back on my blog, rhbfictions.blogspot.com, and thought it was a really good book indeed, funny, well-told and with great artwork," Richard Bruton, also a regular contributor to the Forbidden Planet International blog, wrote in a letter to the Sunday Mercury. "But, as could have been expected, the local MP Khalid Mahmood is shocked.

("In fact, I seem to recall from my time living in Birmingham that Mr Mahmood was regularly shocked about anything in the headlines and frequently popped up in the press and the TV news to say so)."
“'I’m absolutely appalled,' he said. 'I don’t want to stop former criminals writing about their experiences. But to actually put information into a book like this which will only increase the criminal knowledge of inmates is highly dangerous. We don’t want our prisons turning into universities of crime.'

"Aren’t prisons universities of crime already?" challenged Richard. "How many studies have shown that young petty criminals are better served by non-custodial sentences as they tend to come out of prison far more educated in the ways of the criminal than they were before they were incarcerated?

"... I’d like to think the major problems of society could be stopped by doing something as simple as preventing a few convicted criminals reading a comic book but I think the situation may just be a little more complicated than that."

To clarify, Mr Kelly e-mailed me following the Sheffield event expressing concerns over the Sheffield Star article before concluding:
'I therefore think it is best that you do not book any more tables at upcoming Golden Orbit events'.

I think I have been very matter of fact on this and straight forward on what he said.
Since the Downthetubes article appeared he has expanded on this, and perhaps changed his position, to say that I can appear at the Liverpool event with assurances that I will not publicise myself or my book being there.
Is this right? Authors cannot publicise their books in connection with Golden Orbit events? That my attendence at such events should be removed from future blogs and mentions on my site? And if contacted by any media representative I should make no comment.
Should I not have the right to both exhibit and publicise the fact?

This has to be the stupidest thing I’ve ever heard. Tell me is Mr Kelly planning on banning all writers and artists who use Violence, and Sex in their comics also?

I’ve read SV and to be fair at no point did I feel the need to start my own drug smuggling ring. Maybe I missed something?!?