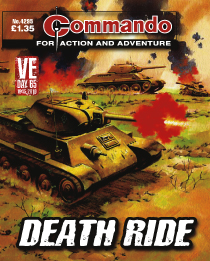 The first two stories of the latest Commandos from DC Thomson, on sale this week, continue the VE-Day series first issued for the 50th anniversary 15 years ago. Denis McLoughlin handles the tank story with Commando regular, Ibanez, take care of our paratrooper story. Covers, with portraits on the back, are by Ian Kennedy.

Commando No 4298 is written by relative newcomer Steve Coombs with art by the veteran José Maria Jorge. "We think the combination has worked well," editor Calum Laird says.

If you haven't picked up a Commando recently, you might want to at least check these out. To the Last Man, released earlier this month, proved an entertaining story from Ferg Handley, covering a period of the Second World War era that has had little coverage in war comics, revealing that even after the surrender of Germany in 1945 life was not plain sailing for occupying forces.

The Commando format of two frame pages and lengthy caption boxes as well as balloons to drive the story doesn't suit all tastes - but its now unique position on the UK news stand as an adventure digest affords it some respect, and its continued publication is evidence enough that it works as a storytelling medium. The stories continue to be well crafted, often offering new insight into wartime conflict and the soldiers that fought in those wars.

From the first day of war in 1939, the soldiers, sailors and airmen of the countries opposed to Hitler's Germany knew that it would be a long, bloody struggle before the Nazis were toppled to defeat.

They couldn't know then that the day of victory would come in May, 1945. For Sergei Baltor, Soviet tank commander, it would finally end in the burning centre of Berlin, dead comrades and shattered tanks marking every mile of the road to victory. 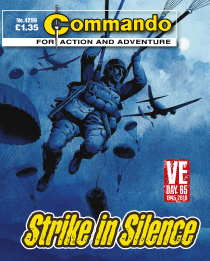 For Sergeant Bill Copeland of the US paratroopers there would be plenty of trouble to face before VE Day — both from the enemy and from within his own ranks... 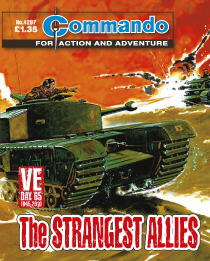 Germans in tanks are Panzer men, aren’t they? Crews of Panthers, Mark IVs or maybe even Tigers.

But not Churchill tanks.

And yet, that’s what happened. A group of Germans and Austrians, each with their own reasons to hate the Nazis, volunteered to serve in British tanks fighting their own countrymen. They were determined to help the Allied cause, even if some Allied soldiers didn’t want them to. 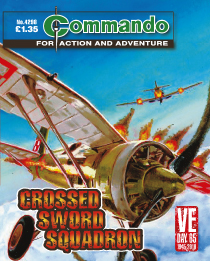 Veteran pilot Pavel Sobotka was the sole survivor of the 9th Escadre — a much-feared Polish fighter squadron that had been whittled away, pilot by fighting pilot, through the long, hard-fought years of World War II.

Then, as Pavel's Hawker Typhoon hunted for the enemy over the D-Day beachhead, he encountered an figure from his past, dragging up memories. Memories best left forgotten...