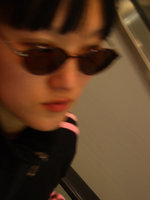 Continuing ‘cross cultural comics month’ on the show, the Strip! radio show this week is looking at the winners of last year’s Manga Jiman (Pride in Manga) competiton run by the Japanese Embassy in London to find the best new Japanese style comics made in the UK.

Dickon Harris talks to the runners up – Zarina Liew and David Lander - about their entries to the competition and the crossover between British small press and manga styles in their work; while Alex Fitch talks to Yuri Kore about her winning entry “The boy who runs from the sun” and drawing comics again, having moved to Britain from the Manhwa industry in Korea, where she had seven books published.

Fans of 2000AD co-creator Pat Mills' work might also want to check out the Panel Borders archive. Continuing the podcast's month long look at 'cross-cultural comics', Alex Fitch talks to Pat about his forays into the French market over the last 15 years, writing such titles as Sha and Requiem Vampire Knight illustrated by Olivier Ledroit, which have only been released in English in the last couple of years by Heaby Metal and Panini.

Alex and Pat also talk about the latter's collaborations with the late artist John Hicklenton which have found a greater and more appreciative audience in Europe, translated into French and other European language and released as Graphic Albums than they did in their country of origin.