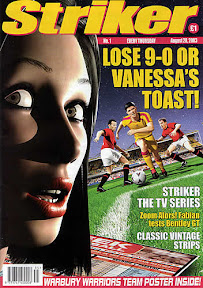 The entire 25-year archive of the football strip Striker, first published in The Sun and now featuring in mens magazine Nuts, is to be available online as free to view comics on the Striker website when it relaunches in early July.

Creator Pete Nash told fans via the Strkerworld forum (registartion required) earlier this week that the stories will be released in stages of at least one page a day, seven days a week, with five strips to a page.

"The rationale for doing this is to build up as big an audience as possible so that potential licensees in publishing, computer games and film/TV can assess Striker’s appeal through its website following," Pete explained. He says there is strong interest from a film company that’s seeking to raise finance for a film or TV series but it’s making slow progress so far. Similarly, there is keen interest in creating a computer game from three developers - but once again the problem is raising finance.

"To print and market the entire Striker archive as a series of books would cost well into six figures and publishers are cautious about taking this on without an idea of how many books would sell," Pete adds.

"We know Striker is read by over 200,000 people who buy Nuts - but what we don’t know is how many people will visit the Striker website every day to read the free strips. It’s this figure that will be so important to potential investors in the Striker brand."

"I've met many licensing agents who want to represent and market Striker but they would all like to know just how many fans – both existing and potential – are out there. That’s what we shall start to find out by the end of this year."

The web archive will include the first Striker story that was reprinted in the comic, which was the shortened version that was created for the Striker annual published in 1989. The story that will be released on the website will feature the original Sun strips that have never been seen since 1985.

The availability of the archive will be promoted through the Striker page in Nuts and also on Facebook and Youtube in order to reach a global audience.
Posted by John Freeman at 7:46 pm