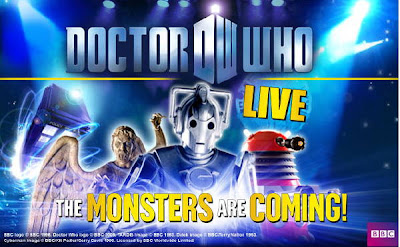 Tickets for the BBC Worldwide Doctor Who Live - The Monsters Are Coming! are now on sale.

The show will be a  spectacular audio-visual experience - think their successful stage show version of Walking with Dinosaurs but with Doctor Who instead - featuring live music, special effects and appearances from the show's most popular monsters including the Daleks, the Cybermen, Weeping Angels, Judoon and Oods, to name but a few.

Taking in nine cities and 25 dates, Doctor Who Live kicks off in London at Wembley Arena on 8 October 2010, and will visit Sheffield, Glasgow, Birmingham, Manchester, Nottingham, Cardiff and Liverpool, culminating in Belfast on 7 November.

With an out-of-this-world set, Doctor Who Live promises the same excitement, adventure and suspense that viewers have come to expect from the TV programme.

Although actors from the TV series will not be appearing live on stage, it will feature specially filmed new video scenes including an exclusive from Matt Smith's Doctor.

Email ThisBlogThis!Share to TwitterShare to FacebookShare to Pinterest
Labels: Doctor Who, Doctor Who Live, Events