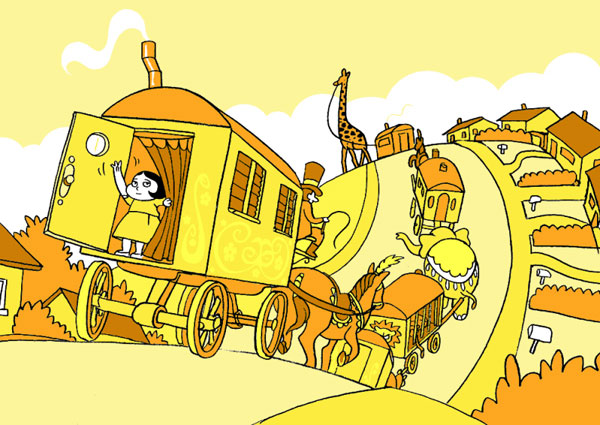 Fans of Brighton-based creator Paul O'Connell's work with brilliant artist Lawrence Elwick may already be familiar with his gentle comic, She's Leaving Home. Inspired by inspired by now-designer Laura O’Callaghan-White's frequent yearnings for what was "out there" as a youngster, the strip has appeared in print and online - and for mobile via ROK Comics.

Anonymous in the strip, the little girl that was the focus of the story now has a name: 'Lil'.

"Lil has caught the interest of independent US production company Spoke Lane Entertainment," Paul tells downthetubes, "who would like to produce a series of childrens books,featuring Lil and have launched a Kickstarter campaign to try and fund the project.

Kickstarter is one of a new breed of indie funding initiatives whereby in return for a small pledge of financial support for a project, backers receive a 'reward'.

For instance, by giving Lil a $10 dollar pledge (around £6.50) you would receive copies of the first two books in the series which would be printed as 5.75" square glossy thick card books. "Which is actually cheaper than if you bought them when they are published!" Paul points out.

"The more you pledge, the better the reward and we have some pretty cool rewards on offer.

"Backers will only be charged for their pledge if our full target amount is raised," he adds. "So if we don't raise the funds, you don't owe a thing - but then you won't get to hold these lovely little books in your paws
either..."

Paul's work as a writer and graphic artist has appeared in a variety of international books, magazines and comic anthologies. As well as self-publishing collections of his own solo and collaborative work under the title “The Sound of Drowning”, Paul's work has also been exhibited in the UK, Australia, New York and Europe.

Lawrence Elwick also lives in Brighton and reads Tintin whilst listening to jazz and avoiding haircuts. He also plays the harmonica and more of his work can be found on his blog at http://elwick.blogspot.com

Laura O’Callaghan-White, who provided the inspiration for the story and who still owns the small red suitcase she used to dream of packing and running away with, is currently a designer of skateboard graphics for Lush Longboards.

• More info at www.worldoflil.com - or go straight to the a Kickstarter pledge page (registration required to make a pledge)
Posted by John Freeman at 8:00 pm