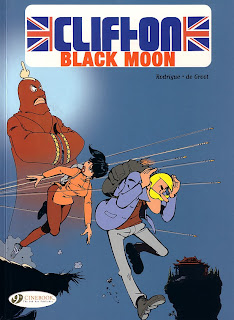 In the previous book Clifton met his glamorous sidekick Jade with whom he now has to infiltrate a religious sect in North Korea know as the Black Moon. The nephew of a senior British figure has apparently fallen under the influence of this sect and Clifton and Jade are tasked to bring him back to safety in Britain. Having literally bought their way into the money obsessed sect, they have to determine who out of all the hooded sect members their quarry is and how they are going to get him away for the sect's compound and out of the secretive country.

Originally published in 2004 as the 19th Clifton album Lune Noire, Black Moon continues de Groot's look at the British from the opposite side of the Channel. The most obvious digs at British sensibilities are the two British agents already undercover in North Korea, known as Fish and Chips. Their politeness and unflappability are rather taken to the extreme, while Clifton and Jade's target is described to them as "Tony's nephew". The young readers of the book will not get the reference but with Rodrigue drawing him as a caricature of a young Tony Blair, older readers will. 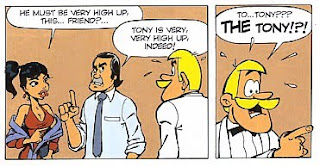 De Groot also combines references to North Korea's alleged nuclear bomb program with religious sects only interested in the wealthy or powerful, and adds in a villain who's lair would not look out of place in a James Bond film with its stylised doors and enormous indoor aquarium. Rodrigue's art runs the range from an accurate RAF Hercules transport aircraft to the humorous praying of the sect by hitting each other on the head with a book. He even has one fish in the aquarium fall in love with Jade.

As with the previous Clifton book, Black Moon is a tongue-in-cheek James Bond story for children, with Rodrigue's detailed artwork and de Groot's plotting and cheeky digs at Britons and the British way of life making the book readily enjoyable for adult readers as well.

There is one more de Groot/Rodrigue Clifton book still to be translated. Hopefully Cinebook will treat us to that one as well.

• There are more details of the English language Clifton books on the Cinebook website.
Posted by Jeremy Briggs at 7:00 am