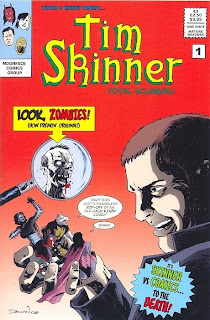 We've missed this title from the combined talents of award-winners Andy Winter and Declan Shalvey via Moonface Press, so we'll make up for it now. Check out Tim Skinner, Total Scumbag, described over on the Forbidden Planet International blog as "jumping between often vulgar pastiches of well loved comics characters and recent trends this is sick, perverted, twisted filth full of violence and sex."

"It's the first time Declan and I have worked together since the Eagle Award-winning Hero Killers and we're both delighted with the results," says Andy.

Soon after Tim Skinner inherited his grandfather’s old comic book collection he discovered something extraordinary – it was magic and by making a simple wish he could step into the pages of any of the fabulous four-colour fantasies his heart desired. He could hang out with cowboys, futuristic robots or whiny adolescent mutants.

Unfortunately, Tim is a loathsome piece of garbage and instead of enjoying fun and frolics in a universe of action and adventure he brutalizes and exploits his comic-book chums for his own nefarious ends... Truly, Tim Skinner is a total scumbag!

Crammed to the gills with pokes at modern comics and modern comics types, parodying many a popular character, including Judge Dredd, and creators like Alan Moore, the one shot comic, which will be on sale at next month's Comic Expo doesn't spare comics readers either. "Winter and Shalvey are happy to bite the hand that feeds and they smile as they do so," notes FPI's Joe Gordon.

Tim Skinner has also been reviewed on Comic Book Resources by Rich Johnson and on Comic Related, by Dave O'Leary.

Also on their way from Moonface Press are two more titles: superhero title Brit Force #1, with a cover by Glenn Fabry, and Brothers, both drawn by Andrew Radbourne.

"I'm really pleased with Brothers - it's the big, crazy, 1000mph story I set out to write in the first place with splashes of triumph, tragedy, romance and loads of completely over-the-top violence," says Andy.

"Andy R has done some terrific work - there are several sequences from the script that he's just picked up and run with, transforming good, solid scenes into genuinely excellent ones."

• Read more about BritForce and Brothers on Andy Winter's blog
Posted by John Freeman at 12:50 pm