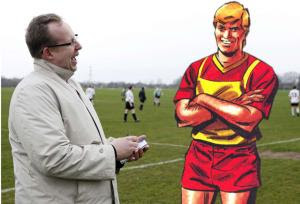 • The Independent on Sunday carried a two-page 'interview' with Roy "Roy of the Rovers" Race today, a splendid piece of well-researched work about the character and his history by writer Cole Morton. The piece not only promoted the new Classic Comic released last week (see news story) but revealed Egmont's new online Roy of the Rovers project, which gives Racey fans the chance to play alongside Roy, and score the winning goal in a cup final. Choose a look, type in your name online and Egmont will print a comic that looks and feels like the one you remember, but has you as the star. This internet-age wish-fulfilment will become possible in the coming weeks. Read the full 'interview'

• Some bad news for fans of comics in newspapers: in the aftermath of the closure of subscription comic The DFC it seems The Guardian has cut its entire Comic Supplement from its Saturday edition. So no Vern and Lettuce or Super Animal Adventure Squad -- or any Comic for that matter! Let's hope readers complain...

• A quick reminder that the online strip Huzzah!, which features contributions from Dan McDaid, Dylan Teague, Rob Davis, Faz Choudhury, Dave Taylor, Paul Harrison-Davies and D'Israeli, among others, is cracking along nicely here. We gather there is talk of a print collection...

• Paul Birch reports, in his latest Speech Ballons column for the Birmingham Mail, that Borders' Bookstores UK now has a graphic novel section specifically for children's titles. "Publishers likely to benefit over the coming months include Walker Books, Penguin, Classical Comics, and Cinebook," he notes. "The latter specialise in bringing best-selling European comic books to an English-speaking readership and reviews of some of their titles will be appearing at Speech Balloons soon." Read the full column...

• Adam Cadwell has posted a report on the indie comics event Thing 2009 over on the Manchester Comics Collective forum, revealing it would seem that offering biscuits and cakes is a good way to help sell comics and thoriughly recommending Roger Langridge's Mugwhump the Great over on Act-i-vate. "It's wonderful stuff," says Adam, "So while I was disappointed that Langridge's new The Muppet Show comic wasn't available due to UK licensing reasons, I was consoled by picking up a handmade minicomic of the first chapter of the Mugwhump story. Excellent." He has plenty of other good-looking recommendations from the like of Paul Rainey and others, too.

• We're sorry to hear of the death of comic creator Ron "Nobby" Clark, who has died aged 85. "Nobby was one of the important figures in moving the action story away from historicals to more modern adventures," notes Steve Holland in a detailed tribute to the creator on Bear Alley. "Although his first action strip was a Western, he took over the writing of "Captain Phantom", a wartime spystrip featuring a "man of a thousand disguises". These were fast-moving and entertaining yarns which helped establish a more modern style of adventure strip in the UK with writers like Nobby Clark and Mike Butterworth ushering in the kind of strips that would dominate during the 1960s..." Read the full tribute on Bear Alley

• And finally for today... Brickman, Lew Stringer's classic cartoon character, is currently appearing in US title Elephantmen, and, mirroring the fate of the well known comics character he's inspired by, he's killing him off! "It's been 30 years since Brickman first appeared and I'm marking the anniversary year by killing him off!" Lew confirms. "Yep, don't miss Elephantmen 17 for the first part of Brickman R.I.P.! Coming up in future months, the Battle for the Trowel and the NEW Brickman!" For more details on Elephantmen visit the official website here:
http://www.hipflask.com/issues/elephantmen17/ or the official Brickman website at: brickmancomics.tripod.com
Posted by John Freeman at 9:07 pm