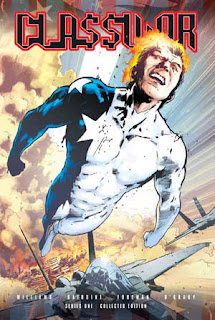 • ComX publisher Eddie Deighton has just been interviewed for a new article, published here on comicon, giving a little insight into the company and his thoughts on the industry, offering advice for small publishers and comments on viral marketing. He also talks about the 90-page graphic novel Path, which sailed under most people's radar.
The terrific Cla$$war and John Higgins' Razorjack - we hope to post reviews of both next week - are available this month as hardcover and softcover collected editions, respectively.
Somewhat chastened, perhaps by the problems that beset ComX in the past - most beyond the company's control, not least the theft of their equipment, Eddie says that, "this time ‘round, we’re not going to rush projects just to maintain a presence in the public eye.
"From both a financial and timing perspective, we need to make sure all aspects of the publishing model are working efficiently before we solicit them for release," he continues. "We are still self-publishing, indie-publishing, whatever people want to call us, so we still have to count the pennies back at base.
"..Our publishing model, at least for the time being, is going to focus on graphic novel format, collected editions, complete story-arcs, etc. That was one of the big lessons we learned from our last foray into the comics industry. Read the ful interview here on comicon
Watch out also for another interview with Eddie in an upcoming issue of Judge Dredd: The Megazine.

• Talking of interviews, Insomnia Publications publisher Crawford Coutts has been talking to the Edinburgh Evening News, commenting on the recently announced news that the publisher is getting support from Business Gateway as part of Scottish Enterprise's Growth Pipeline. ""We see enormous potential in the USA and Canada," he told the paper. "...We are now working further with Business Gateway to look at how we expand further in the industry and link with other industries such as TV, film and merchandising."

• (via Forbidden Planet International): Will The DFC return? The good news is, publisher David Fickling say it will, next year as an independent title. "We are going to come back next year independently,” publisher David Fickling told the Federation of Children’s Book Groups in Sussex, journalist Jayne Howarth reports. He also revealed that when Philip Pullman, who wrote The Adventures of John Blake for the comic, heard of the closure he told David that the “story must continue.
“Don’t let the closure of your comic stop your great enterprise,” he said.
Steve Holland also notes a news item published in The Bookseller (5 April) noting that the growth in sales of graphic novels could see the title relaunched reportng David was exploring different options for the comic's future. "It's a special creation that should come back and needs to come back in some way," he said. Steve offers some comment on the graphic novel model.

• Former Punch cartoonist Noel Ford has been talking to the Professional Cartoonists’ Organisation website Bloghorn about how he became an artist. "I didn’t have much choice," Noel, who is editorial cartoonist for half a dozen national UK publications andproduces work for calendars, greeting card and book illustration (including the Grumpy Old Men series of books). "Brainwashed by having Film Fun and Radio Fun read to me from the age of two, bombarded with my Uncle’s and Auntie’s huge backlog of Beanos and Dandys, I drew my first cartoon around the age of five (Child to mother, “Why are bananas nice?” Mother to child, “Because you like them.”) Okay, okay, I was only five, remember." He's Bloghorn's Artist of the Month, which has also been promoting the new edition of Foghorn Magazine.

• Steve Holland reports he is hard at work on The Art of Ron Embleton book, reprinting some of Ron's finest work from the pages of Look and Learn. "With about 600 pages to choose from, it's going to be a cracking book," he enthuses, posting some examples of Ron's wor on Bear Alley.

• Over on the Birmingham Mails' Speech Balloons column, Paul Birch plugs the return of revamped (sorry) and reinvigorated fanzine From the Tomb. The story is a .jpg, so you'll just have to exercise your fingers and click the link!

• If you're a fan of the Robin Hood legend, you may get a kick from these designs for an animated Robin Hood movie by Jon Haward. "In 2004 a writer friend of mine asked me if I would be interested in drawing designs for a Robin Hood animated movie... sadly like a lot of things, they didn't get the funding."

• Talking of design work, there's a smashing post on long-time 2000AD contributor D'Isreaeli's blog on how a selection of Dredd artists have portayed the architecture of Mega-City One over the years.

Happy Easter!
Posted by John Freeman at 8:11 am