Cancertown To Get Expo Launch 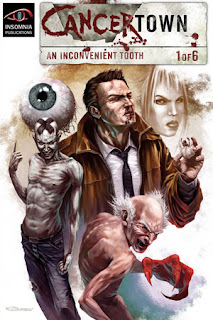 When Bryan Talbot, multi-Eisner award winning creator of The Adventures of Luther Arkwright, the first British graphic novel, reads the first ever creator-owned work from a new creative team and says its the first outing of creators "will make their mark on the future comic industry," it's time to sit up and take notice.

Here at downthetubes we've been playing close attention to developments at Insomnia Publications, and the fast-developing acclaim writer Cy Dethan and artist Stephen Downey, two of over 100 creators the company has been working with, have been getting.

We've also plugged Cancertown, written by Cy with art Stephen Downey and we're delighted to report the book will be launched at the Bristol International Comics Expo next month.

Cancertown is the story of Vince Morley, a man with big problems and a brain tumour like a baby's fist, who lives with one foot in a monstrous alternate world he calls Cancertown. When the lost and dispossessed of London start tripping over the same cracks in reality he spends his life avoiding, Morley realises he must confront the residents of Cancertown - and risk finding his place among them.

The book is the first creator-owned title by Cy Dethan from Edinburgh-based Insomnia Publications, tipped as “ones to watch” in the Forbidden Planet blog’s “Best of the year 2008” roundup.

"Cancertown will disorientate you, suck you in, chew you up and spit you out and you might well be in need of a change of underwear by the end," warns Bryan Talbot in his introduction for the book, enthusing of the creative team behind it. "Don't say I didn't warn you."

“Unusually for a book from an independent publisher we have had to increase the initial print run by 50% based on pre-orders alone,” said Crawford Coutts, Managing Director of Insomnia.
Cancertown is the second title to be released this year by the publishing company which now is now working with over 100 creators, many of whom have worked for Marvel, DC, 2000AD, Image, DC Thomson & Co. Ltd. Heavy Metal, ImagineFX, IDW, Caliber Comics and Sony Computer Entertainment Europe.

“The buzz surrounding the launch is incredible,” continues Crawford, “and credit is due to all the other Insomnia creators who have been doing a fantastic job promoting each other's work around the web, on Twitter, at events etc. This mutual support by creators is exactly what we were aiming for when Insomnia was founded. The results of this have been unbelievable and will only get stronger as we grow.”

Formed in 2006 by Dundee University graduate and former DC Thomson & Co. Ltd employee, Crawford Coutts, Insomnia Publications will release six titles in 2009 and has more than 20 further titles already in development by international creative teams, scheduled for release over the next two years.

The company has already gained critical acclaim for anthology title Layer Zero and the graphic novel Cages and the company was recently selected to be a part of Scottish Enterprise’s Growth Pipeline, to assist Insomnia develop and grow.

“Insomnia’s books are aimed at older teen and adult readers," says Crawford. "With each of our products we look to publish something which is unusual, literate and thought provoking and Cancertown succeeds in meeting all three dead on.”

• Cancertown will be launched at the SPExpo, part of the Bristol International Comics Expo on 9th May 2009. Visitors to the show will be able to get the 176 page, full colour book at a special price of £10. Cy Dethan, creator and writer and Stephen Downey, artist, will be at the Insomnia stand at the SPExpo in the Mercure Hotel to talk about the book, sign copies, and sketch characters (better ask Stephen to do that, we've no idea what Cy might draw...)

• Free Chapter one preview on MyEBook.com

• Keep up to date with all the latest news and products every Monday at Midnight on the official Insomnia Publications blog: www.TheRedEye.co.uk
Posted by John Freeman at 3:48 pm