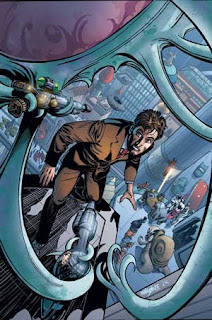 (with thanks to Matthew Badham): A new Doctor Who one shot from US publisher IDW, Room With A Deja View, is in the pipeline, written by British comics columnist Rich Johnston and drawn by Rex Mundi artist EricJ, with a cover by Grimjack artist Tom Mandrake.

It’s described as "an internally complex time travel story, a good third of which happens backwards," by Johnston, "set on a patchwork space station filled with multiple races all hiding from the rest of the galaxy.

"This was a story I’ve had knocking around my head for far too long (most British writers, hell, most British people have at least one Doctor Who story inside them)," he reveals, "and I was stunned that it breezed through the IDW and BBC approval processes as easily as it did.

"I was offered the gig a month ago, on the day I was made redundant. No wonder I went a bit doolally."

• Doctor Who: A Room With A Deja View is published by IDW this July, alongside the first issue of the ongoing series. Read more about the project on Lying in the Gutters
Posted by John Freeman at 10:20 pm