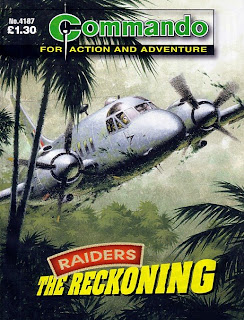 Commando issue 4187, Raiders: The Reckoning, is one of the current batch of four Commandos on sale now and brings to a close the current run of Ramsey's Raiders stories.

Created by writer Ferg Handley, the Special Raiding Force of the British Army lead by Captain Jimmy Ramsey initially fought the German Africa Korps during World War II in issue 3854. The latest batch of Raiders stories began with Raiders Recalled in issue 4163 published in January this year which was set during the Korean War, as was its sequel Raiders On The Rampage in issue 4171. The latest two stories were set during the Malayan Emergency with the first Malayan story being Raiders At The Ready in issue 4178.
The cover art for each of the four new stories was by Ian Kennedy with internal art by Keith Page. An interview with Keith which covers his work on Commando as well as the rest of his career will be appearing on downthetubes very soon.
In the meantime the full checklist of Ramsey's Raiders stories that have appeared in Commando is as follows -
3854 - Ramsey’s Raiders
3861 - The Raiders Return
3854 - Ramsey’s Island Raiders
3874 - Raiders’ Revenge
3877 - Raiders From The Sky
3885 - D-Day Raiders
3898 - Raiders On The Rampage
3902 - Renegade Raiders
3906 - Raiders To The Rescue!
3949 - Raiders In The Reich
3960 - Ramsey’s Rebel Army
3963 - Raiders’ Round-Up!
3970 - The Final Raid
4163 - Raiders Recalled
4171 - Raiders On The Rampage
4179 - Raiders At The Ready
4187 - Raiders: The Reckoning
The Commandomag website is here.
Ferg Handley is interviewed about his Commando stories here.
Keith Page's Blog is here.
The details of the Ramsey's Raiders issues on the CommandoMag site begin here.
Posted by Jeremy Briggs at 5:16 pm