Who Gazes Upon The Watchmen? 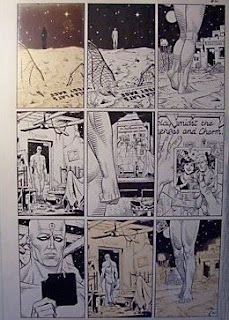 Pages of Watchmen illustrated by Dave Gibbons have been appearing on eBay and selling for amounts that defy any thoughts of a credit crunch. In recent weeks four pages have appeared, most combined with the original colour guide for the page by John Higgins.
Chapter 2 page 26 which has Rorschach visiting the Comedian's grave went for £4800 plus an extra £250 if you wanted the colour guide page.
Chapter 3 page 5 which has Laurie in her dressing gown trying to deal with multiple Doctor Manhattans sold for £5001.77. 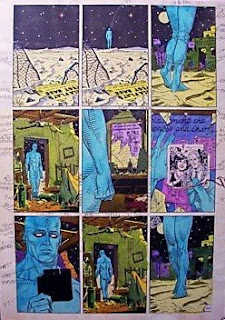 Chapter 3 page 27 which has Doctor Manhattan walking on the surface of Mars whilst President Nixon contemplates the losses suffered in a nuclear war sold for £4058.
However those pale in comparison to chapter 3 page 20 in which Doctor Manhattan walks into the deserted Gila Flats Test Base and finds the Polaroid photo. Along with its colour guide it sold for a whopping £5600.
What did appear but did not sell was the original cover for the graphic novel. If you think that the new "group shot" cover to the graphic novel isn't quite as classy as the old "blood splash" cover then you could have bought the art for that original cover as well for less than one thousand pounds. However since it was only 1p less than one thousand pounds no one was interested. Perhaps sanity has prevailed after all.
Posted by Jeremy Briggs at 5:11 pm