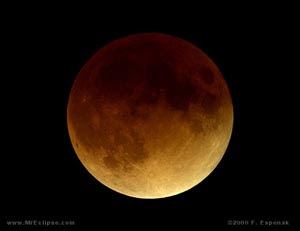 The last Total Eclipse of the Moon before December 2010 will begin in the small hours of Thursday 21 February in the UK.

The entire event will be visible from South America and most of North America (on 20 February) as well as Western Europe, Africa, and western Asia (on 21 February).

This NASA web page explains that during a total lunar eclipse, the Moon's disk can take on a dramatically colorful appearance from bright orange to blood red to dark brown and (rarely) very dark grey.

An eclipse of the Moon can only take place at Full Moon, and only if the Moon passes through some portion of Earth's shadow. The shadow is actually composed of two cone-shaped parts, one nested inside the other. The outer shadow or penumbra is a zone where Earth blocks some (but not all) of the Sun's rays. In contrast, the inner shadow or umbra is a region where Earth blocks all direct sunlight from reaching the Moon.

In Western Europe and the UK the time of the eclipse on the 21st is as follows:

• For more information, visit this NASA page, and to find out more about lunar eclipses visit the agency's special web page lunar eclipses for beginners.

• Image above: this picture of total lunar eclipse was captured on 20 January 2000. by Mr. Eclipse/Fred Espanack (www.mreclipse.com).
Posted by John Freeman at 7:28 am