Doctor Who Art and Magazines on ebay 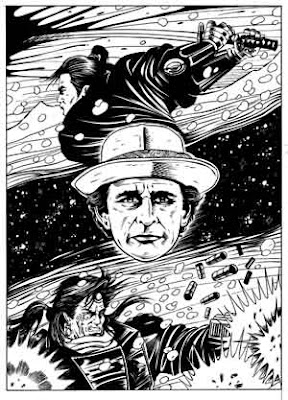 (Posted by John Freeman, updated 6/2/08): Several items are now up for sale on ebay from me, with more to come, which some readers may be interested in here:

• "Ravens" Promotional Art
This piece of art by Brian Williamson (right) was commissioned to promote the comic strip "Ravens", written by Andrew Cartmel, which ran in Doctor Who Magazine #188 - 190 in 1992. It would have featured in Diamond Previews and attendant PR but I cannot recall if I ever featured it in DWM itself.
The story saw a medieval Japenese warrior transported to the present to save a mother and child from a teenage gang.
Brian is now of course contributing comic strip to Torchwood Magazine as well as many other publications.
The illustration measures just over 210 mm width by 300 mm and the board includes the signature of the artist, in pencil. It is drawn on Marvel art board.

• "Metamorphosis"
The Daleks get a satisfying comeuppance in one of the final pages from "Metamorphosis", a strip written by Paul Cornell and drawn by Lee Sullivan for the Doctor Who Year Book 1993. In the story, the Seventh Doctor and companion Ace turn the tables on the Daleks' plot to transform the Doctor (due to his Time Lord genes' susceptibility) and a shipload of 'blank' embryos into Dalek-hybrids with their Mutation-Beam. 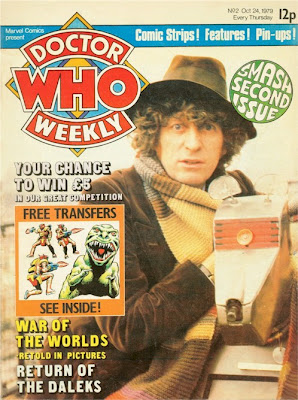 Early issues of the Marvel weekly that mutated into the Monthly and then Doctor Who Magazine. Some great strip work by writers such as Pat Mills and John Wagner and Steve Moore, and artists Dave Gibbons, David Lloyd and Steve Dillon.

The first four issues of this Marvel UK title reprinting the early Doctor Who comic strips that featured in Countdown, TV Action and TV Comic. The Countdown strips are excellent and the magazine was a labour of love from Gary Russell and his team.

• Dinky SHADO Mobile
This is the later re-issue with the 'rugged' roof. Comes with much sought after missiles - three of them!