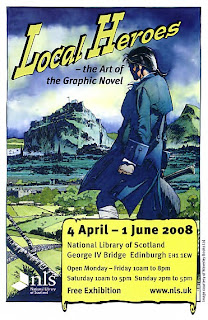 There were more details at Hi-Ex of the comics exhibition that the National Library of Scotland is putting on later in the year in Edinburgh.

Previously reported here as Comics Grow Up! it has now been retitled as Local Heroes - The Art Of The Graphic Novel and will be taking place at the National Library Of Scotland on Edinburgh's George IV Bridge from 4 April to 1 June.
The exhibition will be open seven days a week for the two month run and admission is free.
More details can be found at the NLS Website.
Posted by Jeremy Briggs at 11:59 am