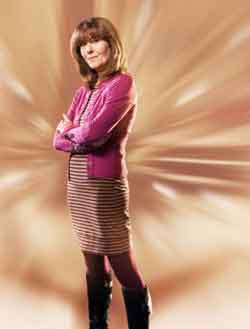 Despite bad news on some fronts for children's drama in the UK - the cancellation of Grange Hill surely a reflection of how disparate TV viewing has become that it can no longer attract a large audience - the BBC has announced several new commissions for its children's channel CBBC.

Among them are a second season for Doctor Who spin off The Sarah Jane Adventures and a new season of M.I. High.

New to the CBBC drama family are Half Moon Investigations about crime, based on the books by Eoin (Artemis Fowl) Colfer, corruption and general wrong doing in the school playground; We Are Family (working title), following the colourful and heart warming comedic adventures of a singing family who are a talk show's resident pop group; Roy, the story of an extraordinary cartoon boy marooned in the real world; and Paradise Café, a beachside mystery with a supernatural twist.

Announcing the line up, Anne Gilchrist controller of CBBC described drama as being "at the heart of CBBC".

"We're very excited about these new and returning commissions," she continued. "As well as the titles we're announcing today, we are also developing an exciting drama based in the north east of England for 2009/10 and a project from Lime Pictures with writer Jeanette Winterson. The dramas will be from across the UK, and I am extremely proud of such a strong line-up."

On the cancellation of Grange Hill, Gilchrist explained that "Part of CBBC's reputation for reflecting contemporary Britain back to UK children has been built upon Phil Redmond's brilliantly realised idea and of course it's sad to say goodbye to such a much loved institution."

Ratings for the series have declined in recent years, with what were once controversial storylines replaced by mild comedy. The Scotsman notes that perhaps reality has left Grange Hill behind, and the disruptive behaviour and classroom language of 2008 cannot be broadcast before the evening watershed.

Gilchrist feels the lives of children have changed a great deal since Grange Hill began and "we owe it to our audience to reflect this.

"We're actively seeking out new and exciting ways of bringing social realism to the CBBC audience," she outlined, "through drama and other genres."

• The first season of The Sarah Jane Adventures will begin to be released on DVD in March.