Exclusive: Stand By For Action! 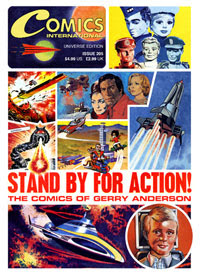 Comics International is to continue its unique coverage of classic TV SF in British comics with six linked features devoted to the shows of Gerry Anderson.

Written by Shaqui Le Vesconte, a leading expert on Anderson in comics (he's webmaster for Gerry Anderson: The Complete Comics History), this mammoth and exhaustive series is to showcase artwork by some of the world’s top illustrators who brought the fantastic worlds of International Rescue and Spectrum to life on the page, including such greats as Frank Bellamy, Ron Embleton and Mike Noble.

Part 3 (#207) is dedicated to the many strip incarnations of Thunderbirds while Part 4 (#208) features Captain Scarlet and Joe 90. Comics based on Anderson’s live action projects, UFO, Space:1999 and others are explored in Part 5 (#209) while Part 6 (#210) wraps it all up with a look at Project SWORD, Agent 21, Starcruiser and those Anderson concepts seen only in comics or test story form.

Anderson’s many creations have not just appeared in British titles. His vivid futures hold global appeal to young and old alike. Accordingly, the six-parter will also explore various international editions.

Cosmic Publications is offering Gerry Anderson devotees an exclusive a money-saving opportunity to have these six special issues delivered direct to their door every month as they come off the presses. Not only is it dropping its usual 12-issue minimum, but it is offering six issues for the price of five! Get #205-210 for just £15 (£19 first class) in the UK; mainland Europe £25/€36; rest of the world $60 (air)/$46 (surface).

Acquired by Cosmic Publications at the end of 2006, Comics Iinternational was launched in April 1990 to fill a need for a trade magazine for the US and UK comics industry. From its 48-page 4,000 copy debut, it has expanded to a 100-page monthly with many pages in full colour and a circulation in excess of 24,000. Read internationally by fans, collectors, publishers and creators, it is the independent guide to the world of English-language comics.
Posted by John Freeman at 12:24 pm

Email ThisBlogThis!Share to TwitterShare to FacebookShare to Pinterest
Labels: Magazines