Marvel in the UK - The Early Years 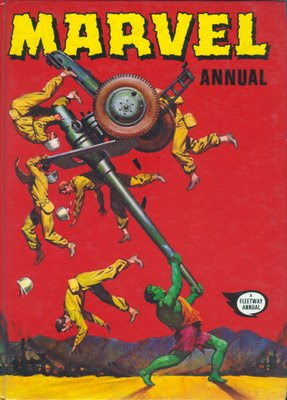 With plenty of interest in Marvel UK right now from sites such as It Came From Darkmoor, regular readers not already checking out Lew Stringer's brilliant Blimey! blog might want to head over there now and read his three part history of early appearances of Marvel superheroes in Britain.

As most people reading this know, Marvel Comics established a British arm in the 1970s to handle reprints and some distribution, but there were plenty of other companies that had already licensed various strips, some even running in the same titles that also featured DC Comics characters, and Lew details them in his three-part guide.

The overview includes details of ghastly colouring mistakes and re-writes of the original material that see the Silver Surfer murdering the Inhumans, and Spider-Man's retirement!

• Part One charts the earliest Marvel UK reprints including Smash! and Pow!
• Part Two covers the colouring madness that was the Fantastic Annuals and more
• Part Three covers the TV21 Marvel reprints and more