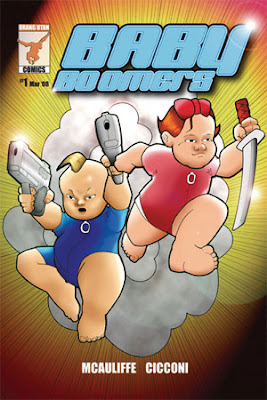 Baby Boomers is a heartwarming tale of two adorable infants and their ongoing desire to cause each other as much physical pain as possible.

Writer Richard McAuliffe and artist Chad Cicconi say that with the new title, they are simply doing their part to convince the next generation of comic readers that perhaps having children might not be the best option to take. While at the same time reassuring those who have already spawned that things really could be much worse.

“As soon as I saw the sample pages I knew this was a title that we had to get out there” explains Orang Utan Comics founder Peter Rogers. “No Universe, no continuity, no convoluted backstory. Just two babies fighting - with Jerry Bruckheimer producing and John Woo in the director’s chair.

"Baby Boomers is as high concept as it gets and that’s why it works. Simple but never stupid, Baby Boomers is like a classic newspaper humour strip on steroids.”

McAuliffe and Cicconi are both relative newcomers and Baby Boomers is their first published work.

“I just hope people like it and find it funny," says McAuliffe. "If they do, it's all in the writing, if not... blame the artist, he won't mind. I'd like to thank all the people who saw snippets of this online and gave us so much encouragement to make the move into print.”

“I had a great time working on this book, and I'm excited to see it in print” says artist Chad Cicconi.

• Baby Boomers is scheduled to launch at this year’s Web and Mini Comix Thing in London . And it will also be available to buy online at the Orang Utan Comics site from March. For more information on Orang Utan Comics and what else they have planned for 2008, visit them online at www.orangutancomics.co.uk
Posted by John Freeman at 1:47 pm