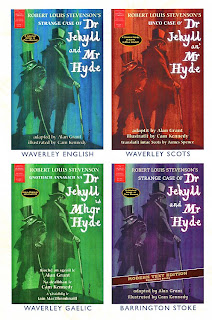 This year's graphic novel created for the One Book - One Edinburgh reading campaign by the "Scottish Dream Team" of Alan Grant and Cam Kennedy will be the Strange Case Of Dr Jekyll and Mr Hyde.
As with last year's Kidnapped graphic novel this will be available in four different versions with Waverley Books publishing the original language version, the Lowland Scots version and the Scots Gaelic version, with Barrington Stoke publishing the Modern Text version.

Unlike last year where the cover illustration changed between editions, this year there will be a consistent approach with all versions using Cam Kennedy's moody illustration of the title characters standing back to back. The books will be differentiated by the colour of their covers - blue for the original, orange for the Scots, green (appropriately) for the Gaelic, and purple for the Modern Text. 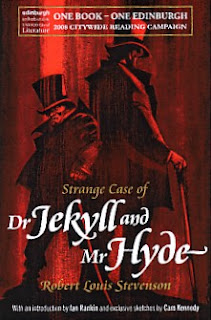 In addition to the graphic novels a new publication of the original text novel has been created with the same cover in red and with a selection of Cam's sketches for the graphic novel included throughout the text.

This is the edition that will be available free to Edinburgh residents on Friday 22 February, the same date that both the book and all versions of the graphic novels will be available to buy through the usual outlets.
Posted by Jeremy Briggs at 12:11 pm