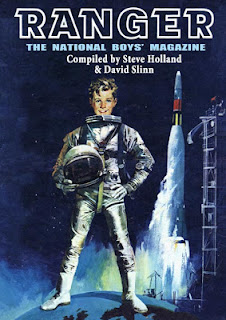 The Rise And Fall Of The Trigan Empire is rightly considered one of the best British comic strips of the late 1960s and early 1970s. Written by Mike Butterworth and initially illustrated by Don Lawrence, it ran in Look and Learn magazine from 1966 until the magazine folded in 1982 yet while many people are aware of this, fewer are aware that the series was created not for Look and Learn but for its sibling title Ranger.

Ranger was an attempt in 1965 to return to the 1950s heyday of Eagle with comic strips and factual information in a highly illustrated and well produced format. Named after NASA's Ranger space probes, the comic ran for 40 tabloid-sized issues from September 1965 to June 1966 (plus 2 annuals) but failed to gain enough of an audience and so was amalgamated into Look and Learn. 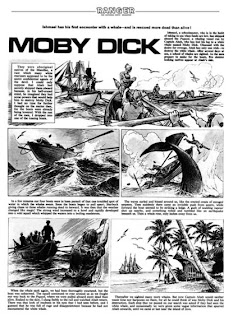 As well as Trigan Empire, the other strip to transfer into Look and Learn was Mike Butterworth's other SF series Space Cadet featuring the character of Jason January and illustrated by Geoff Campion. Some ten years later Ranger may have been forgotten but both Trigan Empire and Jason January Space Cadet were considered commercial enough to be reprinted in hardback books in the enthusiasm for science fiction that followed the release of Star Wars.

Bear Alley Books latest publication is a book on Ranger with a long and heavily illustrated history of the title, a comprehensive index, and reprints of the full run of the Famous Fighting Aces feature by Colin Merrett as well as two complete comic strips, The Adventures of Macbeth by Ruggero Giovannini and Moby Dick by Franco Caprioli.

Ranger: The National Boy's Magazine is compiled by Steve Holland and David Slinn. The 162 page, A4, perfect bound book is priced at £15.99 plus postage and is available directly from the Bear Alley Books website.
Posted by Jeremy Briggs at 2:55 pm