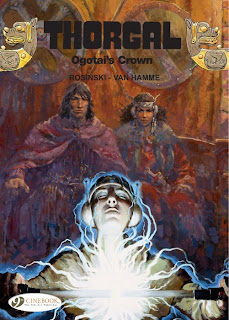 Thorgal - Ogotai's Crown picks up directly from where the previous book, Brand Of The Exiles, left off. However this Thorgal title is very different to the more traditional Viking tale of exile and slavery of the preceding book as writer Jean Van Hamme and artist Gzegorz Rosinki give readers a major dose of time-travelling science fiction.

After Thorgal lost his memory, the treacherous Kriss of Valnor convinced him that he was a merciless pirate called Shaigan as well as her husband. Shaigan and his men have been roaming the seas terrorising all travellers, including Thorgal's own people, the Vikings, ever since. When one Viking survived to tell his tale, Thorgal's true wife, Aaricia, was branded an exile and with his two children Jolan and Wolf Cub, set out to find him. When Aaricia was recognised by Kriss, Kriss had her and Wolf Cub imprisoned and taken to Shaigan's castle as slaves. Meanwhile the young Jolan buys a boat and with two friends sets out to rescue his mother and sister. 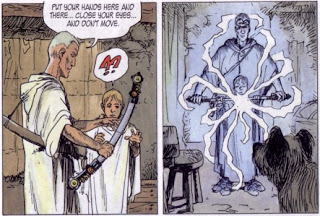 Losing his boat and friends to a storm, Jolan is washed up on an island with a man who seems to know rather too much about him - a man who turns out to be from the far future and who uses a sword-like device to time travel. He displays his ability by retrieving the lost crown of Ogotai. a device that increases Jolan's own psychokinetic abilities giving him a fighting chance to free both his mother and sister from Shaigan's castle and also to free Thorgal from Kriss' influence. 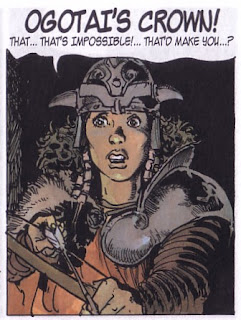 As with the previous Thorgal time travel story, The Master of The Mountains, the plot gets very complex very quickly as time lines are crossed and and an older Jolan is recruited to help his younger self. However at the core of the story, and its strength, is Jolan's single-minded determination to rescue his family from the injustice foisted upon them in the previous book.

It is worth pointing out that for all the stylistic differences between this and the previous Thorgal book, they are two halves of the same story and you really need to have read The Brand Of The Exiles to appreciate fully what is going on in this book. It may not be as brutal as the 'one story = two books' of Van Hamme's modern day series Largo Winch, but like the Largo books it gives him plenty of time to set up his situations and secondary characters which is always to the benefit of the story.

As the second part of the story begun in The Brand Of The Exiles, Thorgal - Ogotai's Crown was not how I was expecting the story to continue yet, as ever, Jean Van Hamme weaves a masterful story with more than enough twists and turns to keep the reader guessing its outcome right through to its conclusion.

• There are more details of the English language Thorgal books at the Cinebook website.

• There are more details of the French language Thorgal albums at the official Thorgal website (in French).
Posted by Jeremy Briggs at 7:00 am