In Review: Thorgal - Brand Of The Exiles 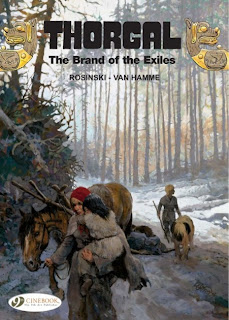 Cinebook may have completed Jean Van Hamme's XIII series of books but they still have others from the bandes dessinee master and one of them is the Viking fantasy series Thorgal. Illustrated by artist Gzegorz Rosinski, The Brand Of The Exiles takes readers back to some characters the series hasn't dealt with for a while, Thorgal's wife Aaricia and their children Jolan and Wolfcub.

In their village the women, children and old men wait for their men to return home from a raiding expedition with food and treasure but instead a lone survivor of the ships appears. He tells the story of their ships being attacked by a pirate known as Shaigan The Merciless who killed or enslaved all but him, a pirate that he recognised as the missing Thorgal. 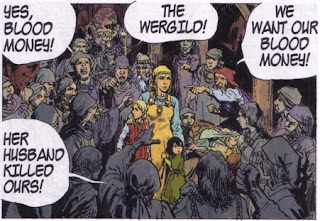 Because of this the women of the village turn on Aaricia demanding blood money for their dead menfolk. She is tried under Viking law and literally branded an exile, the brand on her cheek meaning that she must forever be shunned by all. Taking her children, Aaricia has no choice but to leave and make the dangerous trek to the coast in an attempt to find Thorgal and understand what has happened.

It has been some four books since we last saw Thorgal with Aaricia when she gave birth to Wolfcub and, in that time, while we have been following Thorgal's adventures, his family have been getting on with life, so it is good to have Van Hamme return to these characters. Indeed it is also good to see one of his books written from the underdog's perspective and, with her very visible branding, her young children, winter weather, and little rations, Aaricia is most definitely the underdog here. 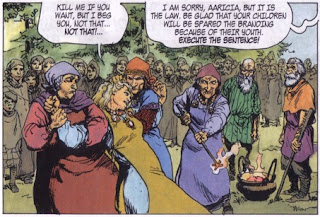 As we discover more about the situation when the ever treacherous Kriss Of Valnor appears, it is Thorgal's son Jolan who comes to the fore and quickly becomes the hero of the piece. As his mother is captured and he is faced with the choice of watching her and Wolfcub sail off into slavery or attempt to free the Viking slaves to help him, he shows his resourcefulness.

Rosinski's rich artwork shows off the Viking village and its population before the story moves on to the family's trek through the forest and mountains, before he his given the chance of a night-time battle between the slaves and their jailers. As ever Rosinski's artwork reminds me of John Ridgway's colour work and it never disappoints.

While Thorgal himself appears in only a single panel of The Brand Of The Exiles, this should not put potential readers off as this is a book that shows off Jean Van Hamme's ability to write just as well for his secondary cast of characters in this series as he can for its hero.

• There are more details of the English language Thorgal books at the Cinebook website.

• There are more details of the French language Thorgal albums at the official Thorgal website (in French).
Posted by Jeremy Briggs at 7:00 am