Here's details of the latest Commando war comics, on sale now in all good newsagents - and in a first for the title, Operation Nachthexen features their first-ever female lead character – the first part of a trilogy.

Based on the online preview the story echoes some of the themes first featured in Battle's Johnny Red and veteran creator Carlos Pino delivers a strip that certainly echoes the look of that classic tale - but the story soon takes its own course.

(Russia's Nachthexen have of course been a rich source of stories for other war comics, including issues of Garth Ennis much-praised Battlefields, released by US publisher Dynamite, reviewed here on Comic Book Daily). 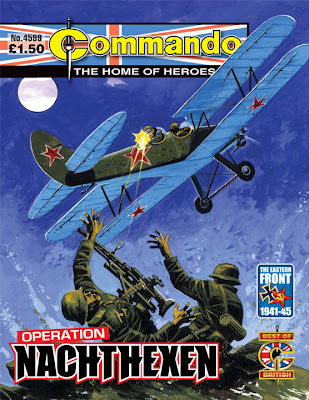 The German forces that invaded the Soviet Union had much to fear once the Russians’ fightback got into its stride. For the Russians are fearsome warriors when roused.

Nachthexen was the German nickname for the female military aviators of the Soviet Union Air Forces 588th Night Bomber Regiment, known later as the 46th "Taman" Guards Night Bomber Aviation Regiment. The regiment flew harassment bombing and precision bombing missions against the German military from 1942 to the end of the war, in nothing but wood and canvas Polikarpov Po-2 biplanes, a 1928 design intended for use as training aircraft and for crop-dusting.

At its largest size, the Regiment had 40 two-person crews and A Dance with Death: Soviet Airwomen in World War II notes they flew over 23,000 sorties and is said to have dropped 3,000 tons of bombs. The most highly-decorated female unit in the Soviet Air Force (and, indeed, one of the few female fighting forces during the war), each pilot had apparently flown over 1,000 missions by the end of the war and 30 of its members died in combat. 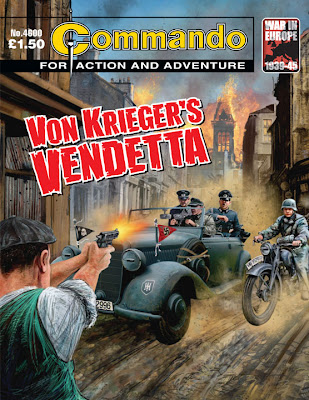 As the Germans rolled into Yugoslavia in 1941, with them came a particularly nasty Major by the name of Von Krieger. Arrogant and overbearing, he singled out one particular Yugoslav teenager as a particular target for his venom - Ancic Miro.

After an attempt on his life, he was determined to catch and kill Miro.

Ancic Miro, for his own part, was happy enough with that. After all, he had several personal reasons for meting out justice to Von Krieger...

The Axis invasion of Yugoslavia was another episode during World War 2 that proved catastrophic for the invaded as well as heroic rebellion from local partisans. The United States Holocaust Museum notes that more than 67,000 Jews were murdered on Yugoslav soil (including more than 3,500 Jews from other countries who had found refuge in Yugoslavia before the Axis invasion) between 1941 and 1945. Around 14,000 Jews survived, many by hiding with friends or neighbours or by joining the partisans. More than 4,500 Jews served in the partisan resistance movement; around 1,300 died in combat.

Approximately 27,000 Roma were also killed: the Ustasa, the Axis allies, killed about 20,000 at the Jasenovac camp system and perhaps as many as 6,000 more on the Croatian and Bosnian countryside. German military and police authorities shot most of the remainder, between 1,000 and 2,000, in Serbia.

After the war, many of the leaders of the German occupation authorities in Serbia were extradited to Communist-led Yugoslavia to stand trial. 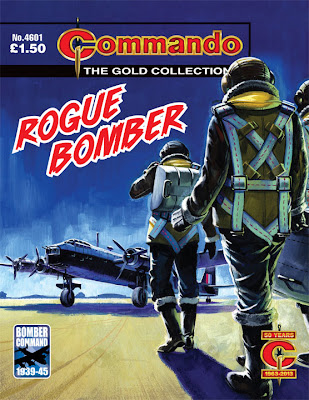 R For Roger was her name... but the air-crews called her R for Rogue.

There was something sinister about this four-engined giant, something uncanny that made brave men shiver with fear when they had to fly in her. For every pilot who sat at her controls came back dead!

Night after night she sat there waiting… waiting for her next victim!

"It’s very hard to capture night scenes in black and white," feels editor Calum Laird, talking about this re-presented Commando tale. "With colour you can use deep blues to help define the scenes but with monochrome, objects and people are either there or they’re not.

"Our inside artist, Sostres, doesn’t have any problems with this though. His use of heavy blacks and broad, bold lines gives the impression of everything being seen in the darkness that bomber crews would have experienced in wartime skies.

“Add that to a brooding cover and a tale of a hoodoo plane — always a Commando favourite — and you have a 1963 winner." 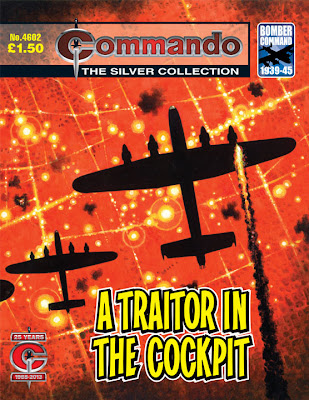 The roar of four mighty Merlin engines powering each Lancaster, the crump of flak bursting close to the planes, the rumble of bombs exploding far below — it was all in a night’s work for the bomber boys.

But for one Lancaster crew, on one particular night, things were going to be different — because their pilot intended to land at an enemy airfield and hand his aircraft and its secret equipment over to the enemy.

"It's been said that espionage stories are not ideally suited to Commando’s text-and-pictures format and to some extent this is true.,” notes deputy editor Scott Montgomery of A Traitor in the Cockpit. "Cloak-and-dagger antics usually require a great deal of thought balloons for characters to explain the twisty-turny plot.

"However, this book blows that theory out the (cockpit) window — because it’s a thrilling air espionage adventure tale that just never lets up, populated by plucky British spies, tough Resistance men and nasty Nazis. Fantastic stuff, we hope you agree."

* Saving based on discounted Direct Debit price compared with shop price. First quarterly payment discounted by 50% at £12.50 and £25 per quarter thereafter. UK bank accounts only. One year discounted subscription rate of £99.
Posted by John Freeman at 10:39 am