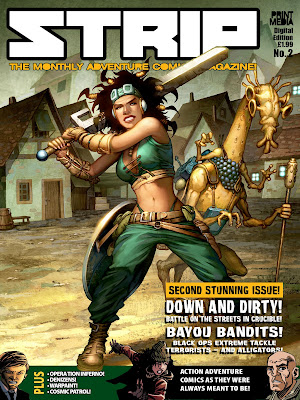 Slightly ahead of its print release, the digital edition of STRIP: The Adventure Comics Magazine #2 is now on sale for iPad in the iTunes store.

The print edition goes on sale in newsagents across the UK from tomorrow (Friday).

• BLACK OPS EXTREME (written by Richmond Clements, art by Stephen Downey) The anti-terrorist team run into trouble in the American Bayou – with survivalists and an angry alligator!

• WARPAINT (by Phil Hester and John McCrea) Re-told from the very beginning - Mia learns more about an ancient war between gods!

• CRUCIBLE (by John Freeman and Smuzz) Trouble on the streets when our adventurers set out to recover a mysterious artifact sought by the Temple of Orlyth!

• DENIZENS (by Miljenko Horvatic and Maxim Simic) Modern civilisation has been wiped out and the world is a greener, deadlier place...

• Buy the digital edition of STRIP: The Adventure Comics Magazine from the iTunes store (iPad only)
Posted by John Freeman at 7:42 am