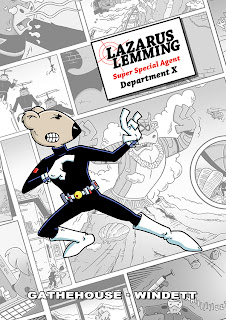 Lazarus Lemming is the top special secret agent of Department X, the covert government agency that investigates eXtraordinary happenings worldwide. When the world's cows are kidnapped to steal their farts, or all the citizens of Transylvania are turned into mindless zombies, it's up to Lazarus Lemming to solve the mystery and save the day!

The title is the work of John Gatehouse and Dave Windett, both long time comic creators for an assortment of publishers, with Dave's art featuring in The Dandy and Simpsons Comics.


John has written over 100 books and annuals, over 300 television shows and thousands of comic strips and short stories for children. He has produced stories for legendary characters such as Inspector Gadget, Pokemon, Scooby Doo, Garfield, Dracula, Spider-Man, Ace Ventura Pet Detective, The Hurricanes, Digimon, Rugrats, Teenage Mutant Ninja Turtles and hundreds of other intellectual properties.


Dave is a professional comics artist and illustrator, his work has been published in Britain, Europe and America. He has drawn comics featuring numerous licensed characters, including Inspector Gadget, Eek the Cat, Ace Ventura, Daffy Duck and Korky the Cat . For the Scandinavian market he has illustrated educational books, business manuals and comics. He has also designed original characters for a variety of publications and provided illustrations for everything from magazines and websites to mobile phones, games, and children's shoes.

• You can grab a digital edition from ComicXology here!
Posted by John Freeman at 6:45 pm