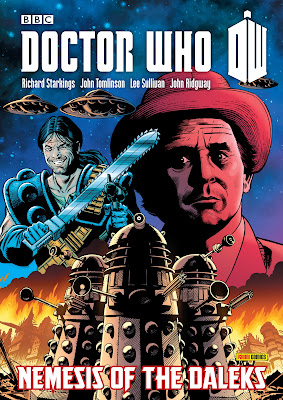 Well, all right, that headline is a little misleading. I'm not talking about new stories (although there have been some, find out more below...). Rather, the release of Doctor Who: Nemesis of the Daleks, a Seventh Doctor comic collection from Panini Books.

Although I plugged this project on social media on release, I've just realized I inadvertently failed to mention this compendium here, which leads with the cracking Abslom Daak - Dalek Killer story 'Nemesis of the Daleks', penned by Richard Starkings and John Tomlinson (writing as Richard Alan), drawn by Lee Sullivan. 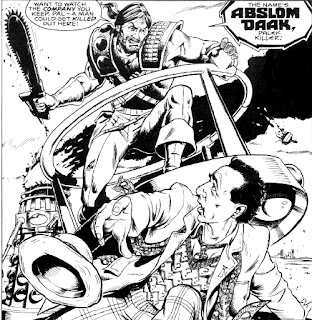 There's a host of other goodies, including the first professional comic strips I edited for Doctor Who Magazine and Paul Cornell's first-ever professional comics commission, drawn by Gerry Dolan – along with Steve Moore, Steve Dillon and David Lloyd's original Daak tales. 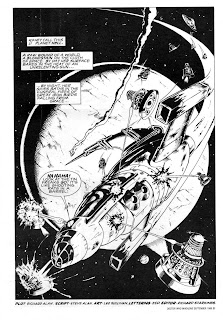 This book is crammed with Seventh Doctor comic stories, including the never-before-collected, oft-maligned but fun Incredible Hulk Presents strips whose creators include myself, Dan Abnett, John Ridgway, Simon Furman, Andrew Wildman, John Tomlinson and many more.

Doctor Who: Nemesis of the Daleks is the fifteenth volume in the ongoing series of Doctor Who Graphic Novels published by Panini Books, collections of comic strips that originally appeared in the pages of Doctor Who Magazine and other related titles.

Nemesis of the Daleks, named after the book’s opening strip, is the second volume of Seventh Doctor comic strips (picking up where the previous A Cold Day in Hell!, published in 2009, left off). The stories in this collection originally appeared in 1989 and 1990. At that time the strips not only ran in Doctor Who Magazine but also in a second Marvel Comics UK title, The Incredible Hulk Presents.

In addition to the Seventh Doctor strips, the book includes the popular ‘back up’ strips featuring Abslom Daak from 1980 issues of Doctor Who Weekly and Doctor Who Monthly, to tie-in with the character’s appearance in the 'Nemesis of the Daleks' story.

Panini again commissioned me to provide a detailed commentary on the stories, which includes some fantastic contributions from many of the writers and artists, with reproduced script pages from John Tomlinson and 'Nemesis' design work by Lee Sullivan.

I'm very grateful for the time many took out of busy schedules to answer my questions - asking them to dredge up their memories of strips written almost 20 years ago taxed me, too!

Panini have done a terrific job restoring the strips (Peri Godbold, as ever, the vital cog in this process), and I'm particularly grateful to Steve White for putting me in contact with Incredible Hulk Presents editor Andy Seddon, who I don't think has ever been interviewed about his time at Marvel UK before, and talks extensively about his memories of IHP.

Here is the full list of strips included in the graphic novel. (Titles marked * are reprinted for the first time in this collection.)

I hope you'll go out and buy. Train-Flight by Graham S. Brand & Andrew Donkin, drawn by John Ridgway, included in this volume, is my first work as a comics editor and includes a guest appearance by Sarah Jane Smith (an early example of actress Elizabeth Sladen's support for the Magazine).

While financial circumstances on the title at the time meant we couldn't risk running long form epics like those written by Steve Parkhouse during the Davison era (I would have hated to have started one only for the title to have been cancelled part way through, which was still a possibility, even at this point, because of the show's presumed cancellation), Train-Flight also marks the start of a loose 'arc' that builds to Dan Abnett and Lee Sullivan's brilliant Mark of Mandragora story. An arc that doesn't get in the way of the main storyline at any point, I might add, and utterly confuse its audience... 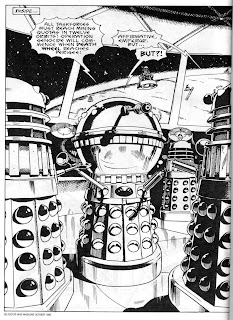 Oh, and if after this you are looking for new Abslom Daak stories, then try and track down copies of  Vworp Vworp Magazine penned by Steve Dillon and drawn by Martin Geraghty.

•  Buy Doctor Who: Nemesis of the Daleks from amazon.co.uk

• Buy Doctor Who: Nemesis of the Daleks from forbidden planet.com

• Read an online interview with Steve Moore about Abslom Daak on the Altered Vistas web site
Posted by John Freeman at 8:02 am