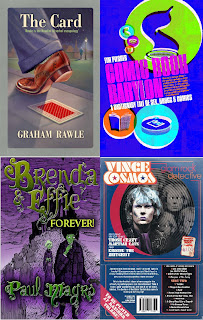 Starting a new series of the bimonthly show on books, Alex Fitch talks to three authors whose work celebrates ephemera and pop culture detritus. 'Graphic Novelist' Graham Rawle discusses his latest novel The Card, which follows the journey of a man who believes he is being employed by the secret service to protect Princess Diana, via playing cards, bubble-gum cards and cigarette cards that are left in his path. Rawle is an author and University of Brighton lecturer who uses graphic design and typography in his work, including collage of text from magazines (Woman's World) and photographic montages (Lost Consonants et al.).

Also, Tim Pilcher talks about his crowd-funded memoir Comic Book Babylon which documents his time working at DC Comics' London office in the 90s, meeting pop culture celebrities such as Grant Morrison, Jonathan Ross, The Spice Girls and Adam Ant; while Paul Magrs chats about his novels and audio plays set around the fringes of Doctor Who, including his latest release Vince Cosmos, Glam Rock Detective where a Ziggy Stardust style pop star turns out to be engaged in an on-going war with aliens on Earth. Magrs also discusses his popular ‘Brenda and Effie’ series of books about the Bride of Frankenstein and a white witch running a B & B in Whitby.