Duncan Fegredo back on Hellboy - Midnight Circus launches in October 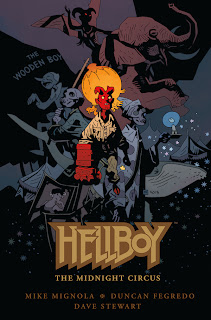 Following up on a collaboration which spanned multiple series, leading up to Mike Mignola’s return to both writing and drawing his beloved demon, British artist Duncan Fegredo will return to tell a story about a young Hellboy’s first brush with hell.

Out in October, Hellboy: The Midnight Circus is a beautifully drawn 56-page graphic novel that finds a young Hellboy runs away from the B.P.R.D., only to stumble upon a weird and fantastical circus and the few demons from hell who inhabit it.

“This one owes a lot to Ray Bradbury’s Something Wicked This Way Comes (pretty much my favourite circus story of all time), but even more to Pinocchio — especially all the spooky, disturbing bits Disney left out. And the work Duncan is doing here is just flat-out amazing,” said Mike Mignola.

“Growing up is tough enough, even when you don’t know the weight of the world rests on the future of your yet-diminutive shoulders. Mike has woven a tale of coming of age for the young Hellboy made all the more poignant for knowing his future. Wonderful, magical, terrifying, this is epic Hellboy on a smaller stage,” Duncan Fegredo added.

• Hellboy: The Midnight Circus arrives on 23rd October 2013 in a beautiful hardcover format similar to the previously released Hellboy: House of the Living Dead (created in collaboration with legendary artist Richard Corben in 2011)

• For more information on Hellboy: The Midnight Circus, check out the exclusive interview with Mike Mignola on Comic Book Resources
Posted by John Freeman at 7:00 pm