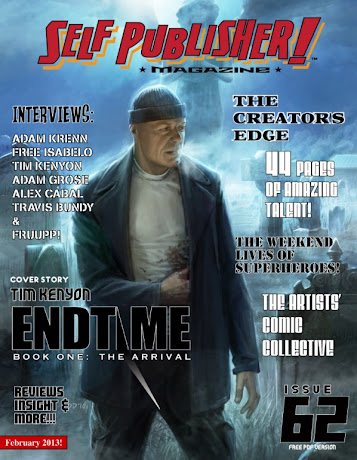 While the latest issue of Self Publisher Magazine - a free e-publication devoted to indie comics - is dominated this time out by US creators, it does include an extensive interview with British illustrator, writer and comic artist Adam Grose, creator of the amazing Cosmogenesis with Tony Suleri, talking to Darren Worrow about his career, his move away from Cornwall and his hopes for his career.

Adam, a Fine Artist by profession, has been working on his latest project, a supernatural novella, for several years.

"I began plotting a supernatural story that was originally going to become a graphic novel in 2009," he reveals. "I was about to submit it to Insomnia, when they folded. I had illustrated the first 28 pages, but I thought it might be interesting to see if I could write a novella instead.

"I decided to follow this instinct and have spent the last three years, on and off, developing the plot further.

"It's a supernatural tale that follows the lives of a couple - an architect and a designer - who uncover a hidden secret.

"I don’t want to say too much at the moment, but it is a composite piece involving supernatural elements and it acts as a metaphor for our current times. It also embodies elements from certainconspiracies I’ve seen on the internet. I find these fascinating and they lend themselves to fiction very well."

Self Publisher Magazine is a great title devoted to smaller publishers, offering some tasty previews of upcoming projects, interviews and practical guidance on self publishing, wherever you are based. The team are improving the look of the title each issue and are currently looking at launching a print edition via a Kickstarter campaign.