Gibson Quarter back in new Undertow 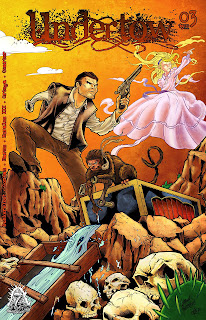 Comic book artist Gibson Quarter - best known for his work on the 'War on Drugs' strips written by Alan Grant, and published by Wasted – reports the latest issue of Undertow (#3) will be released at the US Emerald City Comic-Con on 1st March.

"It's been a while since the cliffhanger ending of  the Organ Grinder story from Issue #2, and we pick it up right from there," he reveals. "This issue also marks the start of Adam Gorham's stellar art work on the other story in this comic 'The Forgetting'."

The Undertow anthology project was started in 2003 by US creator Luke Donkersloo's childhood friend Derek Webster. After a long hiatus, Undertow #1 debuted in 2011 and is where Luke shares his storey. "It's an amazing learning experience as I create something that's given me an immeasurable amount of enjoyment throughout my life," he says."

There's a five page preview of what you can expect on Gibson's blog here. "I'm inking myself on this one," he says, "but Guillermo Ortego helped out on the cover, which was wonderfully coloured up by Greg Harms."

• Undertow # 3 is also available to order (along with Issues 1 and 2) right now at the 7th Wave website.
Posted by John Freeman at 8:30 pm