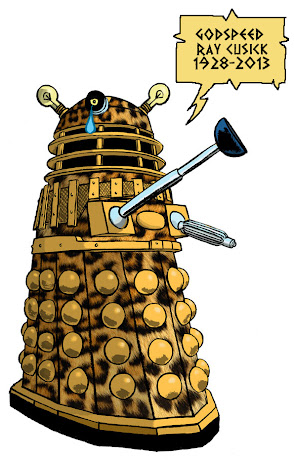 We're sorry to report the passing of Raymond Cusick, designer of Doctor Who's Daleks, and we thank Nick Abadzis for giving us permission to reproduce his visual tribute, posted on his blog earlier today.

While editing Doctor Who Magazine some 20 plus years ago now, I was lucky to encounter Raymond, and fellow early Who designer Barry Newbery, on several occasions. Both kindly opened their private archives to us, enabling publication of some early, previously unseen images from the very first Doctor Who adventures broadcast between 1963 and 1965.

While writer Terry Nation and the BBC jointly shared in the revenues generated from the sale of Dalek merchandise, as a BBC employee working in the visual effects department (alongside Ridley Scott, among others), Cusick received little more than a small bonus, £100 if memory serves, for designing Doctor Who's most popular adversary.

This cursory acknowledgment of his work by his employers at the time is one I am sure many comic creators down the years can identify with.

Godspeed, sir. You will be remembered.